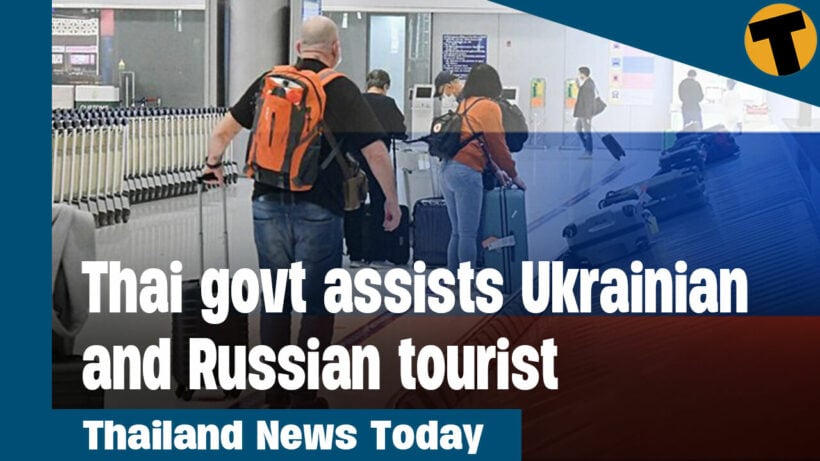 The Thai government says over 7,000 Ukrainian and Russian tourists affected by flight cancellations will be allowed to extend their visas free of charge.

It’s one of a number of measures officials are implementing to help visitors stranded as a result of Russia’s invasion of Ukraine. Other measures potentially include offering shelter and access to a Chinese payment platform.

The governor of the Tourism Authority of Thailand, Yuthasak Supasorn, says most of the over 7,000 tourists from Ukraine and Russia are in Phuket, Koh Samui, Krabi, and Pattaya. Those who need to extend their stay can do so without having to pay the usual 1,900-baht fee.

According to the TAT governor, Russians who want to return home may be repatriated by the Russian government, but will not be deported by Thailand.

Those who are unable to return home due to cancelled flights or the ongoing conflict in Ukraine could be offered shelter, courtesy of the government. The Bangkok Post reports that locations being considered for this are Phuket and Pattaya.

The report goes on to say that tourism operators are now working with the Chinese payment platform, UnionPay, to help tourists affected by sanctions that prevent them from using cards issued by Russian banks. Some tourism associations have suggested the government allow the use of cryptocurrencies for tourists unable to make payments any other way.

The mother of the famous Thai TV actress who was found dead in the Chao Phraya River in Bangkok is calling for another autopsy.

An initial postmortem examination found the actress, Nida who goes by the nickname Tangmo, had died from drowning. Sand was found in her lungs and a large cut was on her leg, which examiners suspect was from the speedboat’s propeller.

The lawyer representing Tangmo’s mother says she wants a former chief of the Central Institute of Forensic Science to perform a new autopsy on her daughter’s body as “there are doubts” about the cause of death. The lawyer says he will make a request with the Royal Thai Police to have Khunying Pornthip, who was the former director-general of the institute and now a senator, perform an autopsy.

The body of the 37-year-old actress was found in the Chao Phraya River on February 26. At around 10:40 pm on February 24, she was on a speedboat with five other people who claim Tangmo fell off the boat when she went to urinate off the back. Many have been skeptical about the claims, including the mother who has said she suspects foul play.

A fire broke out at a luxury resort on Koh Kut, an island off the coast of Trat by the Cambodian border on Sunday morning, burning a villa to the ground where a group of 15, including a famous pediatrician, were staying.

The Soneva Kiri resort released a statement saying all guests staying at villa 63 were evacuated and the fire did not spread to other parts of the island or resort. An investigation is still underway to determine the cause of the fire.

A famous pediatrician at Bangkok’s Ramathibodi Hospital, Jiraporn, wrote about the experience on her professional Facebook page, which is followed by more than 700,000 accounts. She was staying at the villa with her family for the weekend. The fire broke out around 6 am Sunday morning.

The doctor says she heard her mother yelling fire from downstairs. When the doctor went down, she said there was a huge wall of fire. She then hurried back upstairs to tell her daughter and husband. Her husband then directed everyone to climb over the balcony and onto the roof.

She lost her balance on the balcony and had no recollection of what happened until she regained consciousness. Her husband later told her that she had fallen from the roof and had been knocked out.

She has a fractured spine but did not require surgery. She also had injuries on her head that needed multiple stitches. Reports say the guests have wondered why such a high-priced resort lacked fire alarms, a sprinkler system, and smoke detection, but in a statement from the resort, they say all villas have smoke detectors in every bedroom and that the property has highly trained on-site fire teams along with regular fire safety drills.

The question of whether or not to allow massive water fights to celebrate Thai New Year Songkran will be discussed on March 18 at a CCSA meeting. The celebrations with water guns and splashing have been called off for the past two years to prevent the spread of Covid-19.

Recently, the Department of Disease Control warned that the holiday’s water fights from April 13 to 15 would most likely be cancelled if the new Covid infection count reaches 30,000 in one day. Yesterday, the CCSA reported just over 21,000 new cases with 65 related deaths. A spokesperson says the number of patients with moderate to severe symptoms has increased.

While the number of new cases is getting closer to the threshold to call off the water fights, a CCSA spokesperson says people will still be allowed to travel during Songkran. She added that celebrations, like the water fights, will need to at least be held under preventative measures, but no regulations have been officially set.

The spokesperson says the Department of Health has proposed the safety measures for Songkran, which will be discussed by the CCSA on March 18. Other relevant departments will be invited to join the discussion, including the Public Health Ministry, Tourism and Sports Ministry, and the Royal Thai Police.
With many Thais planning trips to see their families during Songkran, authorities are urging the elderly to get vaccinated before the holiday.

The governor of Bangkok has been summoned by PM Prayut Chan-o-cha and asked to explain why residents in the capital are unable to access Covid treatment.

According to a Nation Thailand report, Governor Aswin Kwanmuang met with the PM and was asked to explain the complaints from Bangkok patients.
Addressing the media, the PM confirmed the meeting took place at Government House yesterday morning. He says Aswin has pledged to look into the complaints and the treatment being offered by the Bangkok Metropolitan Administration.

According to the PM, the complaints could be the result of the public not understanding the new measures affecting patients who are asymptomatic or have only mild symptoms. A recent change to government policy means these patients receive outpatient treatment only. They can seek treatment at government hospitals and, if necessary, will be given medication to address their symptoms and then sent home to recover.

The meeting between the PM and the BMA chief followed a number of complaints from activist groups, who claimed many patients were unable to get treatment in Bangkok as hospitals in the capital refused to admit them.

A new villa in Pattaya was confirmed as the first residential building with the longest span between columns and the largest steel box girders installed.

It was early March 2022 in Pattaya when the delivery of 50 tons worth of custom fabricated steel, in the form of box girders and cellular beams arrived at the Majestic Residence construction site, Khao Phra Tamnak.

The architect Mario Kleff and his construction company Wandeegroup Asia continue to set new standards in residential construction in Pattaya and across Thailand. It was just last year when Mario initially installed the longest cellular beam with a length of 48 metres between two columns to support heavily post-tensioned concrete floors.

At the beginning of 2022, Mario’s team had installed an assembly of box girders and cellular beams to form the foundation for the penthouse of the now 2,500 m² villa.

Large box girders were installed to achieve a cantilever reaching over 19 metres to each wing side starting from a centre column. The enormous steel girders were designed by Mario himself.

The project includes a large pool over 20 meters long and a two-storey-tall waterfall and a whirlpool structure make up part of the 900m² ground floor space.

On the second floor, the villa offers over 700m² of private space in the form of a large master bedroom and two additional guest rooms. The ground floor and the second floor includes large crystal-clear anti reflective glass panes. The top floor consists of a 350m² penthouse with sea and city views across Pattaya.

The villa has a state-of-the-art water, electricity and air conditioning system designed by Erik Gubbels.

Guest1
Those who are unable to return home due to cancelled flights or the ongoing conflict in Ukraine could be offered shelter, courtesy of the government The covid cases needing medical attention are going down, new target group for Phukets Hospitels…

BigHewer
7 hours ago, Thaiger said: Japan is now actively looking for alternatives Spoke to an associate of mine a few days ago about the Russia issue. It seems now that third party intermediaries are the way to go. His firm…
Cathat
If they are stuck for food and accommodation why not pop around to the nearest wat and they should help them out,they can also have a free haircut while they are there. Another option for phuket based homeless starving russian…

F-16 fighter crashes during training in Chaiyaphum, pilot is safe