As the investigation into the death of Thai TV actress Nida “Tangmo” Patcharaveerapong enters its second week, here are the latest developments…

• Three days of Christian memorial services for Tangmo (แตงโม) are scheduled to take place over the weekend on March 11-13, from 6:30pm to 8:30pm each day, at Liberty Church Bangkok in Saphan Sung district, Bangkok. Despite her stormy public life, Tangmo was a firm believer in Jesus Christ and often talked openly about her faith. In Thailand, less than 1% of the population is Christian, according to statistics.

• Police announced at their press conference on Tuesday that they will close the case of Tangmo’s death on Friday, March 11.

• Mostly likely, they will charge boat owner “Por” and the unlicensed skipper “Robert” with the original charges of operating an unlicensed vessel and recklessness leading to death. Police might also charge “Job” for destroying and concealing evidence, after they reportedly found he had taken home a wine bottle that had been on the boat, in an attempt to conceal evidence. (More on that below.)

• The Deputy Chief of Region 1 police, Pol Maj-General Udon Yomjaroen, who is the head investigator in the case, said he would report the results of their investigation so far to National Police Chief Pol General Suwat Jaengyodsuk on Tuesday afternoon. Suwat has requested an a quick and thorough investigation.

• At a press conference on Monday, Thailand’s national police chief Suwat Jangyodsuk said the evidence shows the death of the TV actress was likely an “accident.”

• Police also said that witnesses have been lying about their claims. After interviewing each of the five witnesses who were on the speedboat, police said there were conflicting accounts, which didn’t correspond to findings from the forensics team. They are considering charging at least one more of the five boat buddies.

“Each witness was interviewed separately and the stories they told us were different. It is certain that at least one must have been lying.”

• On Sunday, police again questioned “Gatick,” Tangmo’s manager, for more than 7 hours. When she left the police station at 9pm, she didn’t speak to reporters. Tangmo’s other manager, “Anna,” has accused Gatick of lying to police. In an interview, Anna claims she drove to the pier the night Tangmo drowned and talked with the witness who had been on the boat, but that Gatick acted strangely and told her to go home. Anna had this message for Gatick:

“The truth will set you free.”

• Both women are listed as the actress’ managers on her official Instagram account. Anna’s IG is public, while Gatick’s IG has been set to private. It is not known who has been managing Tangmo’s IG account since her death, but netizens have noted that her number of posts have decreased from 2,306 to 2,299, while her number of followed accounts have increased by one, from 1,128 to 1,129.

• Meanwhile, all five witnesses on the boat have reportedly denied allegations of wrongdoing or intent to kill. Last week police said they would likely charge all five with negligence leading to death and giving false statements. So far, police have only charged Por and the Robert with operating an unlicensed vessel and negligence leading to death.

• The witness known as “Robert” has reportedly refused to give a sample of his hair to police for DNA testing. Last week he seemed to evade police interrogation and the boat reenactments, claiming high blood pressure and hypertension. (Heavier rumors about him abound, but we’ll stick to the facts as we currently know them.) Robert also told police he recently had a hair transplant, after Thai netizen sleuths questioned his identity and whether he was in fact the same man who was on the boat shown in CCTV footage. (That might also be his excuse for refusing to give a hair sample, as reported in some Thai media outlets.)

• A a high-profile celebrity lawyer, Sittha Beerbangkerd, says he wants in on the case and has offered to help Tangmo’s older half-brother, Dayot “Toi” Detjob, find out the truth about how his sister really died. Toi is the one who found Tangmo’s body in the Chao Phraya River the Saturday after her drowning.

• Meanwhile, the lawyer of Tangmo’s mother, Panida Sirayootyotin, said she wants a former chief of the Central Institute of Forensic Science to perform a new autopsy on her daughter because she doubts the results of the first one. The mother has previously said she forgives Por and Robert for their role in her daughter’s death, and would accept a gift of 30 million baht, according to her own calculations.

• Together, both Tangmo’s brother and mother have filed a complaint with Nonthaburi police seeking an investigation into the incident, as they do not believe her death was an accident.

• Santhana Prayoonrat, a former police lieutenant colonel, has come out as another witness in Tangmo’s case. He has said that this story has a high-level big wig behind it, spurring much speculation on social media. Santhana is set to testify to police on Tuesday about what he knows.

• Police have already questioned at least 71 witnesses in their ongoing investigation into the death of Tangmo, according to Nation Thailand. Tangmo drowned in the Chao Phraya River on the night of February 24.

• So far, they have been unable to determine whether Tangmo accidentally fell into the river, whether she jumped to escape, or whether she was pushed or thrown overboard. There is also uncertainly regarding the cause of the large slash on her thigh and other scapes on her leg, though a new theory says the boat’s rudder sliced her thigh. Meanwhile, police continue to regard all five of the people on the boat as witnesses, not suspects.

• Over the weekend, Thai netizen sleuths, known as “Pantip detectives,” have uncovered more CCTV footage and leaked it online, showing what appears to be Tangmo jumping from the boat as it passes Thewet Pier. Another video appeared to show Tangmo’s hand reaching up from the water for a white buoy on the side of the boat, which a man onboard (apparently Robert) pulls away.

• More CCTV footage leaked online shows the five boat buddies meeting after the incident at 2am at a gas station about 5 kilometres from NBC boat club on Rama V Road. In the video, they are seen chatting with a sixth person who was not on the boat. It’s unknown who that person was or what was said among them. There is no audio recording.

• On Sunday, divers from the marine police division investigated the spot where Tangmo fell again. They reportedly found two items in the Chao Phraya River near Phibul Songkhram pier and, which were handed to the forensics team. But police have not revealed what they are or whether they are related to the case.

• It’s believed that the divers were searching for objects that one of the men, allegedly Job, tossed into the river after Tangmo fell from the boat, including Tangmo’s wine glass and a bag containing undisclosed contents, in an apparent attempt at destruction of evidence. 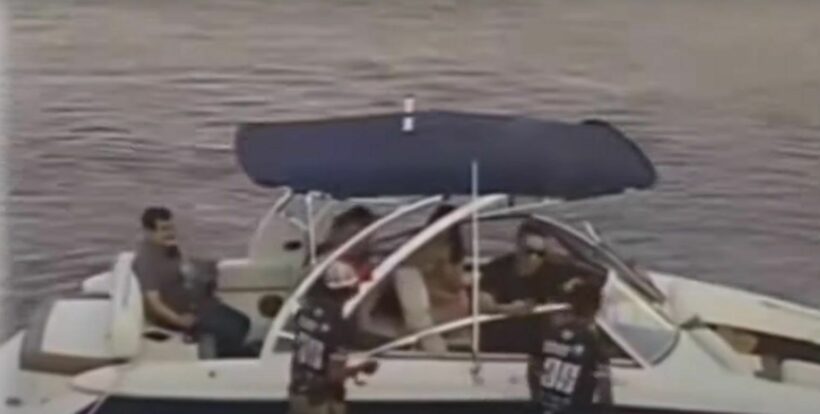 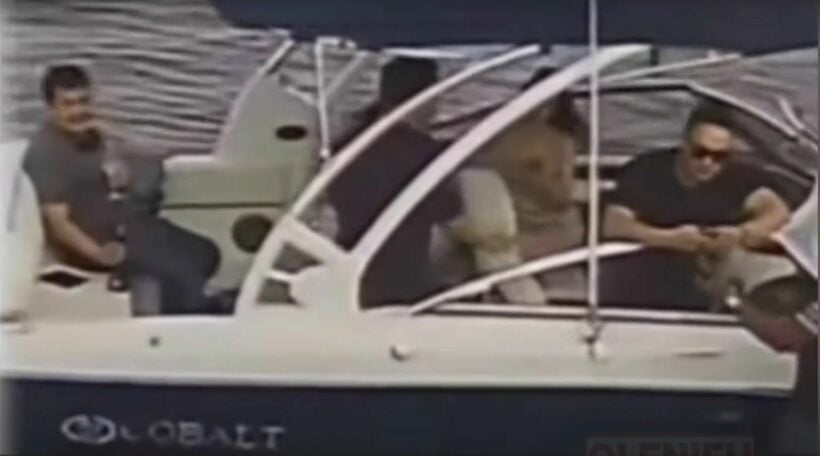 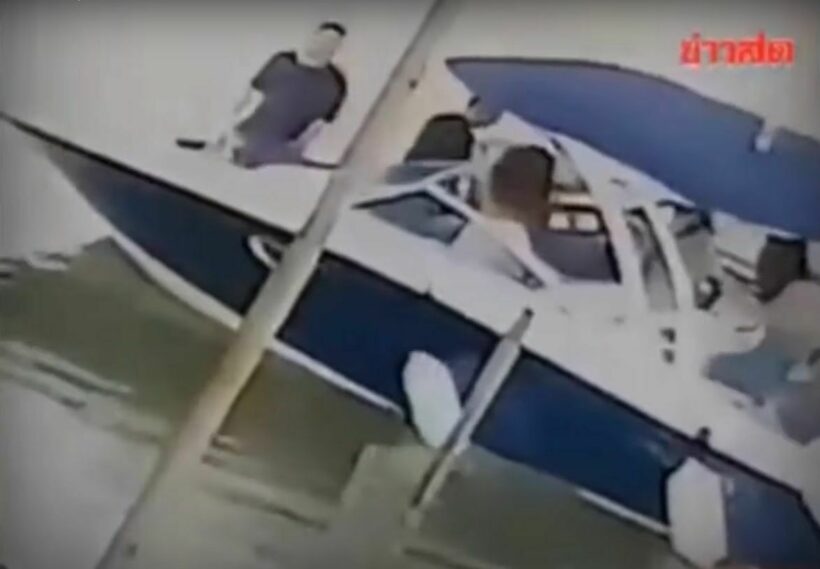 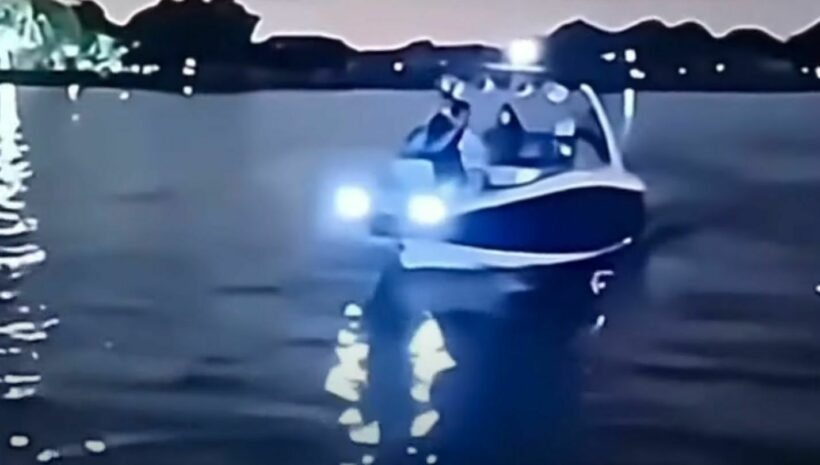 PHOTOS: Screenshots from leaked CCTV footage reportedly showing the boating party before (1-3) and after (4) the incident on the Chao Phraya River on the night on Thursday, February 24, 2022.

Benroon
27 minutes ago, KaptainRob said: Fact: The boat was OUTBOARD powered. More evidence has surfaced today, no pun intended, with the recovery diver revealing additiknal horirfic injuries to Tangmo s body, not previously mentioned by RTP. An autopsy report should…

KaptainRob
2 minutes ago, Benroon said: To be fair why should it be said ? Apart from her family, why should anyone else be informed of the details? It's absolutely no-ones business barring the investigating personnel and the family. You obviously…

Benroon
1 minute ago, KaptainRob said: You obviously have not had the benefit of a Thai wife closely following developments. 😎 The whole of Thailand has picked over every little detail and it's widely acknowledged we have yet to hear the full…

KaptainRob
8 minutes ago, Benroon said: I definitely have - my mrs hasn't slept since it happened incase there's a new development! A prior intelligent woman has lost her marbles over it. I wake up at 3am thinking aliens have landed…

Benroon
On 3/10/2022 at 6:24 AM, KaptainRob said: Drowned bodies sink and only rise to the surface again when bacterial gas bloats the body. The about to be revealed injuries were most likely incurred onboard or within a short time of…