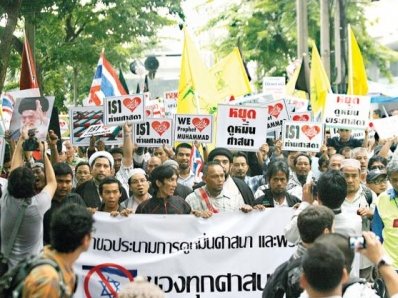 PHUKET: Five companies of anti-riot policemen were deployed to guard the US Embassy in Bangkok yesterday as about 400 Muslims staged a protest against the US government over an anti-Islam film.

“Destroy America!” the protesters chanted, waving placards near the embassy, which closed at noon ahead of the demonstration.

They continued the peaceful protest until rain began to fall. “We don’t want any violence,” said protest spokesman Niyaz, who claimed the demonstrators came from all over Thailand.

“Islam is the religion of peace, but if someone attacks us we’ll defend ourselves,” he said, declining to give his family name.

“The ones who made the film should be punished,” Niyaz said of the film “Innocence of Muslims”, an amateurish production that was posted on the video-sharing website YouTube.

About 750 policemen were deployed at the embassy at 12:20pm. Metropolitan Police commissioner Pol Lt-General Kamronwit Thoopkrajang said the officers came from the 191 special taskforce, Lumpini police station, and an anti-riot taskforce.

Deputy Prime Minister Chalerm Yoobamrung yesterday promised to guard all US businesses and organisations in Bangkok.

As a host country, the Thai government had to protect US interests in the Kingdom, he said, adding that so far, the government has not detected evidence of any third-party group coming in to create violence against Americans.

Prime Minister Yingluck Shinawatra said yesterday that police were ordered to guard the US Embassy to achieve full security.

“We decided to close the embassy early today after being tipped off by Thai police that there was going to be a protest this afternoon,” US Embassy spokeswoman Kristin Kneedler told Deutsche Presse-Agentur.

“We’re not aware of any real threats to US citizens in Thailand,” she said.

Meanwhile, AFP reported that an al-Qaeda franchise in North Africa yesterday urged Muslims to storm US embassies and kill American envoys in Muslim countries in protest over the film, a monitoring group said.

“We call on Islam’s youths to take after the lions of Benghazi [in Libya] by pulling down America’s flags that are flying over all of its embassies in our capitals,” said al-Qaeda in the Islamic Maghreb (AQIM), according to IntelCenter.

AQIM urged people “to burn them [the flags], to stomp them underfoot, and to kill its [US] ambassadors and representatives or expel them and purge our land of their filth in revenge for the honour of the best of mankind,” referring to Islam’s Prophet Mohammed.