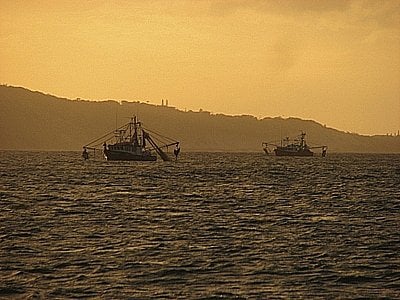 PHUKET: There are certain indisputable facts about fish. With very few exceptions, they look good, taste good and they do you good. Dietitians recommend at least two fishy portions a week. So-called “oily fish” – herring, mackerel, salmon, tuna and sardines – are especially good for you since they contain omega 3 fatty acids that help keep immune systems healthy and prevent cardiovascular problems.

Fish and chips, usually battered and wrapped in yesterday’s newspaper, used to be the favorite fodder of working class Britain. Not any more. Wild fish, even the humble cod, have become scarce and consequently expensive.

Why this parlous state of affairs? The over-riding reason is over-fishing. True, there are other factors such as pollution, global warming, and the loss of habitat. But the insatiable greed of the industry, coupled with the sheer efficiency of modern commercial methods, is to blame.

The herring and mackerel shoals of the North Sea are a thing of the past. It was estimated in the late 1960s that the herring population was down to one per cent of its former numbers and fishing was banned completely in 1977.

Across the Atlantic, the cod industry of Newfoundland collapsed, another victim of over-exploitation on a grand scale. A vast natural resource vanished, whole eco-systems were changed and the cod have never returned.

Closer to home, the commercial fishing of tuna – up from one million to four million tonnes a year – has reached such a state that a BBC documentary, “South Pacific”, estimates that continued fishing at current levels may see a collapse of stock within five years. And not just yellow-fin, but blue and black fin, albacore and big-eye tuna as well.
The story could be repeated about other species and habitats, as well.

In Thailand, one estimate leads us to believe that the Kingdom has about 40,000 fishing vessels, with the number of trawlers – the worst offenders – at just over 2,000. For some incomprehensible reason, the fishing industry wants to up these numbers to 3,619 vessels.

Both figures are almost certainly ludicrous underestimations anyway. And in any case, there must already be more than enough trawlers, since there is a severe and measurable decline in the numbers of fish being caught. If you don’t believe the figures, ask any sport fisherman.

A sailing friend, who regularly fishes by rod and line on extended trips around the islands, told me he is now lucky to catch three tuna a day. And the largest weigh less than three kilos.

But it is not just the sheer numbers of boats; it is the methods they employ. Trawling is the most annihilative of all techniques for catching fish. A trawl is a huge, bag-shaped affair with a closed end dragged for miles along the sea bed behind a powerful boat. Its maw is weighed down with heavy metal bars to ensure it scours the sea bed.

And scour the sea bed it does, divesting of everything that lives down below: fish and squid, crustaceans (such as crabs, shrimp and lobster), even the plants (such as sea grass) that grow there. Any coral that happens to be in its path is unceremoniously ripped from its watery home. The process has been likened to total deforestation, a technique known as “clearcutting”.

Remorseless and cruel, trawling ensures that fish trapped in its maw are often already dead before the net is lifted several hours later. It is, moreover, totally indiscriminate. What is euphemistically called the “by-catch” may contain sharks, dolphins, porpoises or turtles. Six Olive Ridley turtles found stranded recently on a Phuket beach were all in distress. One had a huge propeller gash in its shell, two were missing flippers, a likely result of becoming ensnared in the sharp nylon mesh of a trawl.

Worldwide, it is estimated that 1,000 marine mammals die every day by poor fishing practices; in Danish waters alone, the fishing fleet kills 3,000 porpoises a year. And up to sixty per cent of this by-catch is returned, already lifeless, to a watery grave.

Trawlers in Thailand are supposed to respect a three mile offshore limit. But if you frequent any west coast beach in Phuket, you will see trawlers sailing well within that boundary. Judged by their snail-like speed, they may already be trawling.

Indeed, it is estimated that the same furrow of sea bed may be ploughed three times a year – especially around Phuket, where the water is shallow enough and the bottom smooth enough to enable dredging to continue unchecked. Under these circumstances, what chance is there for the re-establishment of marine life?

There are of course other methods used by commercial fishermen. Gill nets are long panels of netting, set at any depth and supported by headline floats at the top and weighted foot-ropes at the bottom. Sometimes these small monsters can be several kilometers in length. Like trawls, they do not respect aquatic life: they catch fish by wedging their bodies and gills, or by tangling their fins in the mesh. They also accidentally ensnare cetaceans, especially whales and dolphins.

Seines and purse seines are another weapon in the fisherman’s armory. Seines nets were used, as were gill nets, by artisanal fishermen the world over, long before the advent of huge vessels and sophisticated equipment such as radar, sonar, high-powered winches and high-wattage lighting.

Purse seines are more sophisticated: they operate by encircling shoals of fish and then preventing them from ‘sounding’ [going deep] by using a draw string to close the base of the net, thereby forming a purse from which the fish cannot escape. Often used for tuna or marlin fishing, or to catch varieties of pelagic fish which shoal near the surface, they can be used in deeper water where the bottom is too rocky or uneven for trawling. Even fishing by hook and line is more damaging than one might think. After all, some of these lines, baited at regular intervals, can stretch fifty miles behind a ship.

Nylon or polypropylene materials are bad news since they are virtually indestructible. Probably more responsible than any other single invention for the appalling efficiency of modern-day commercial fishing, mono-filament nylon nets last for years. They resist abrasion by rocks, tear coral to pieces, entrap, throttle and cut fish, and ensnare marine mammals. And these nets are practically invisible in sea water.

Some, have a mesh so fine that they allow almost nothing to escape. Melancholy mountains of tiny fish in any Thai fresh market, maybe millions in number, are testament to that.

CATCH OF THE DAY: Scene at a Thai fish market after the catch has been brought in. Photo: Magnetic Globetrotter.

A visitor to Ranong fish market recently observed that, inexplicably, about 95 per cent of the fish on sale there consisted of juvenile barracuda. None of them had been given the chance to grow to adulthood, to reach a size where they might help replenish depleted stocks.

And not only hatchlings are killed: the impact on other species dependent on any small fish for food is incalculable. In temperate waters, huge catches of sand eels are made. Most end up as fish meal, while larger fish such as haddock or cod and birds such as kittiwake gulls or puffins are
deprived of their main source of fo