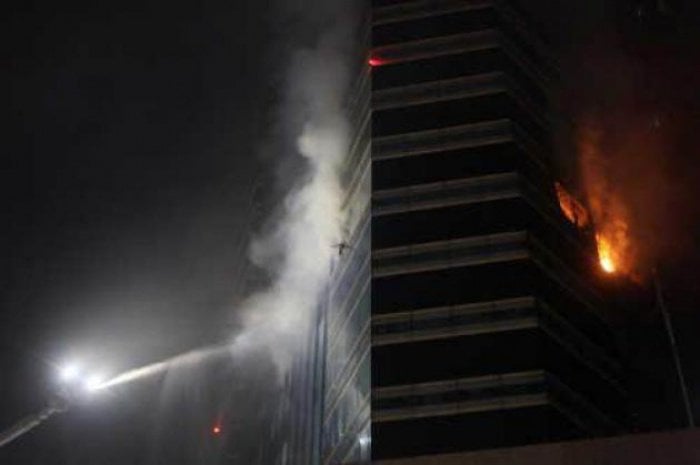 PHUKET: The whole main building of Siam Commercial Bank headquarters in Bangkok is now closed to the public in the wake of a fire that raged through some of its floors from late Saturday night to early yesterday morning.

An investigation is now ongoing to determine how the fire first erupted on the 10th floor of the 34-story building.

One firefighter was killed.

SCB has not yet estimated the damage bill for the fire, which ended up affecting three floors.

However, it insisted that the fire did not damage documents for an ongoing probe into the alleged embezzlement of 1.5 billion baht from the King Mongkut’s Institute of Technology Ladkrabang’s (KMITL) SCB accounts.

Vichit Suraphongchai, chairman of the SCB executive committee, told a press conference yesterday that the damaged documents were not related to the KMITL case.

“Documents on the 10th floor are just mortgage-loan approval documents that were to be scanned to create electronic files,” he said, “These documents were not of crucial importance”.

As soon as the fire became news on Saturday night, speculation mounted that someone may have deliberately lit the fire to destroy key evidence.

Last Friday, KMITL publicly complained that SCB had to date failed to provide crucial documents for the embezzlement probe.

“We are in the process of having the Office of Forensic Science verify signatures on these documents,” he said.

Arthid urged people to avoid spreading false rumors, pointing out that the investigation into the alleged embezzlement is not yet concluded and no one is found guilty yet.

Metropolitan Police Commissioner Lt General Srivara Ransibrahmanakul yesterday said police would quickly look into whether there had been any connection between the KMITL case and the fire.

“At this point, police have already questioned 30 witnesses in the fire case.” He added that police would summon four insecticide-spraying staffers who entered SCB headquarters at 8pm on Saturday.

“We will also check recordings from security cameras,” he said.

Chatuchak District Office acting director Yodkwan Junnapiya said the whole 10th floor of the building was damaged but the damage on the 9th and 11th floor was minor.

He said the main building of the headquarters was now sealed pending an inspection by engineering experts.

“In addition, we have to take into account whether the reopening of the building will affect the gathering of evidence at the scene,” he said.

SCB executives said the building closure would affect its services including it not being able to provide private banking and safety deposit box services today. Arthid said SCB would do its best to reduce the fire’s impact on customers. Departments at SCB headquarters would be moved to the bank’s Bang Khen branch and Chang Wattana branches in accordance with the lender’s business continuity plan.

SCB has set up a contact center at SCB Park Plaza for customers who need to contact its headquarters. It also set up a hot line: 02-777-6600.

Arthid said SCB has reported the matter to the regulator, the Bank of Thailand, and will report it to the Stock Exchange of Thailand this morning.