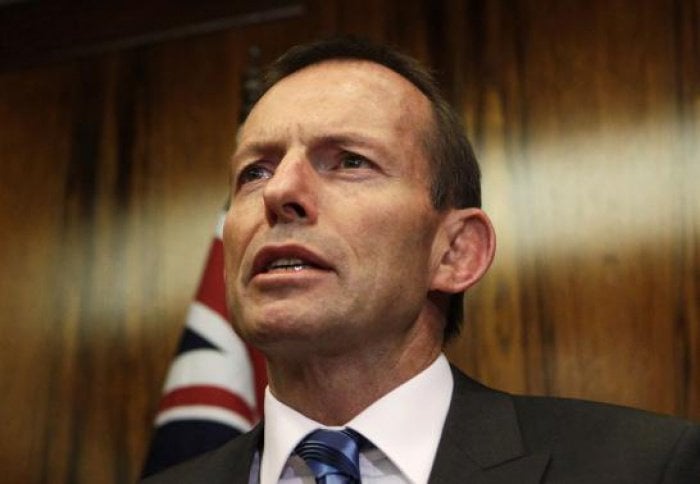 PHUKET: Australian Prime Minister Tony Abbott survived a challenge to his leadership on Monday after his ruling Liberal Party voted down a motion to unseat him after weeks of infighting, but the attempted revolt appears likely to weaken his grip on power.

In a secret party room ballot, a vote to declare the positions of party leader and deputy leader vacant was defeated by 61 votes to 39, a party official told reporters.

In a short televised statement following the vote, Abbott insisted the turmoil was over and called for unity within the conservative party and the country.

“The Liberal Party has dealt with the spill motion and now this matter is behind us,” Abbott said.

Still, a consensus appeared to be forming that the large number of votes against Abbott indicated a lack of support so damaging as to potentially render him a lame duck.

“It does suggest to me continuing instability, because 40 percent of your party has just expressed no confidence in you,” Rod Tiffen, an emeritus professor of political science at the University of Sydney, told Reuters.

“I think that it means leadership speculation will be on the agenda in Australian politics until it’s resolved by Abbott’s exit, really.”

Following the vote, online gambling site Sportingbet.com.au had Communications Minister Malcolm Turnbull as the favourite to be prime minister at the next election, with a A$1 bet paying out at A$1.60. Abbott was at odds of A$2.75, while Foreign Minister Julie Bishop was A$6.50, an indication of the damage done.

The motion was brought on Friday by an MP from Western Australia after mounting criticism of Abbott’s leadership, culminating in his awarding of an Australian knighthood to Queen Elizabeth’s husband, Prince Philip.

No member of the government had indicated a direct challenge to Abbott, although most attention had focused on Turnbull, a former party leader toppled by Abbott.

The prime minister has faced a torrent of criticism in recent weeks over policy decisions ranging from his handling of the economy to the knighthood.

Abbott, who had described the call for a leadership vote as a “very chastening experience”, vowed ahead of the poll to be more consultative in his approach after several of his so-called “captain’s calls” backfired on his administration.

If Abbott had been ousted, Australia would have had its sixth prime minister in eight years.

Opinion polls have consistently shown voters prefer Turnbull to lead the party but his support for a carbon trading scheme, gay marriage and an Australian republic have made him unpopular with the right wing of his party.

Bishop, also deputy leader of Abbott’s party, had been touted as either a potential successor to Abbott or party deputy under Turnbull.

Seen as one of the best-performing ministers in Abbott’s cabinet, Bishop had said she would vote against the motion but had not ruled out standing if the positions had been declared vacant.

Removing Abbott would have required more than 51 of the 101 members of the federal Liberal Party at the party-room vote.