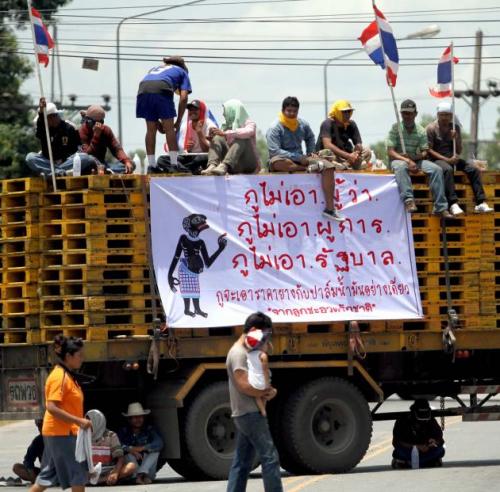 PHUKET: The Public Health Ministry is planning to file an appeal with the Supreme Administrative Court so it can go ahead with making the warning graphics on cigarette packets larger.

The Administrative Court on Monday suspended the plan, under which tobacco companies would have to increase the size of the warning graphic from 55 per cent of the surface on cigarette packets to 85 per cent.

“I will consult with legal experts to find out about the appeal procedure,” the ministry’s permanent secretary Dr Narong Sahametapat said.

He had just received the Administrative Court’s order to suspend imposition of the new ministerial edict. Meanwhile, Dr Nopporn Cheanklin, deputy director of the Disease Control Department, said health officials would convene today to study the legal procedure on filing an appeal to the Supreme Administrative Court within 30 days of the lower court’s ruling.

He said that according to the World Health Organization’s Framework Convention on Tobacco Control, a public health authority should not ask tobacco firms for recommendations on regulations aimed at controlling the consumption of their products.

The Administrative Court issued its ruling after the Thai Tobacco Trade Association, which represents more than 1,400 retailers nationwide, called on the court to invalidate the Public Health Ministry’s “unconstitutional” decision to impose new warnings on cigarette packages. The association reasoned that the regulation would lead to real problems for retailers. These would include higher operating costs and a likely consumer shift towards cheaper, lower-margin, roll-your-own tobacco, which is not subject to the new warnings and yet makes up about half of all tobacco sold in Thailand.

It would also provide new incentives for the black market to increase – where products are less expensive to buy, highly profitable to sell and often have smaller warnings or no warnings at all.

Moreover, the ministry has no legal authority to issue this regulation, it argued. Dr Hathai Chitanont, director of the Thailand Health Promotion Institute, said he backed the ministry’s attempt to control tobacco consumption and to file an appeal to the Supreme Court. He suggested the ministry do a lot of homework and collect more scientific data and evidence to prove that making the warning graphics bigger on cigarette packets would reduce the number of smokers and prevent new ones.

However, he acknowledged that he was aware of no research so far proving this assumption.

PHUKET: The protest by rubber farmers in Nakhon Si Thammarat has reached boiling point, with a court issuing arrest warrants for six protest leaders in the face of road closures and a rail line being blocked off.

Warrants were issued at the request of police yesterday for the arrest of Chayanin Konglang, Kongkiat Chuthong, Sompas Kwanthong, Sammit Juiplod, Prapas Pakdeerat and Wanida Kaewmanee. This is in addition to the arrest warrants issued for nine people last Friday after a bloody clash between police and protesting farmers erupted in this southern province.

Nakhon Si Thammarat police chief Maj-General Ronnapong Saikaew said he expected the arrests of the six protest leaders to take place this morning. Anti-riot police have already been dispatched to a wildlife sanctuary near the protest sites, he said.

“Train passengers are stranded, while those travelling by road have to take a detour,” he said.

“The government has embraced patience, but people who have violated the law will face legal action,” she said.

Several government figures have now tried to link opposition politicians to the intensifying protest by rubber farmers. Labour Minister Chalerm Ubumrung said he was fully confident that someone had engineered the ongoing protest.

“I can predict that this protest won’t end easily,” he said, adding, “It has never been easy to stop rallies in the South.”

The southern region is known to be the stronghold of the Democrat Party. PM’s deputy secretary-general Suporn Atthawong claimed his negotiations with rubber farmers’ representatives had concluded satisfactorily with an agreement that the government would peg the rubber price at Bt80 per kilogram, but dozens of teenagers outside the meeting venue in Nakhon Si Thammarat later loudly rejected the agreed price. He insisted that the teenagers were not, however, rubber farmers.

Piya, meanwhile, said the demonstrators at the protest sites could be divided into two groups: real rubber farmers, and those who are pursuing a political goal.

Twenty-five Democrat MPs yesterday held a press conference at Parliament House to dismiss any suggestion that they were behind the angry protests.

“Those who hurl such allegations are shameless and unethical,” said Surat Thani MP Suthep Thaugsuban.

Democrat deputy leader Thaworn Senneam said Democrat politicians had met protesters merely to express moral support after some of the locals were injured during the clash on Friday. He urged the government not to use violence against any of those involved in the protest.

PHUKET: Somchai Kerdrungreung, the uncle of nine-year-old Chakkraphan “Nong Fluke” Srisa-ard who was shot and killed on February 23, 2003 in a drug sting operation, withdrew his appeal against three police officers from Bangkok’s Bang Chan Police Station after he was offered 1 million baht in compensation.

Somchai had filed an appeal against the July 28, 201