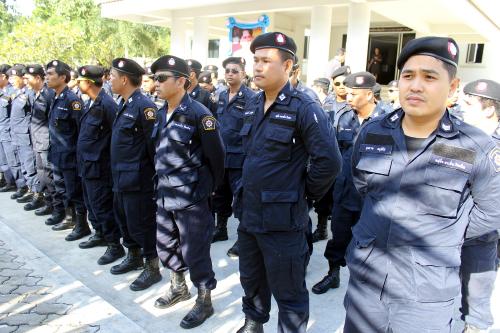 PHUKET: Phuket Police are on standby to provide reinforcements for the Nakhon Sri Thammarat Provincial Police as the Deep South province braces for further protests by palm oil and rubber farmers.

Oil palm and rubber farmers protesting against the depressed prices for palm oil and rubber blocked the railway at Ban Tun junction in Cha-uat district this morning.

In response, Phuket Provincial Police Deputy Commander Peerayuth Karachedi today ordered the superintendents from every police station across Phuket to make available a total of 155 policemen.

The officers will be deployed to Ban Tun if Provincial Police Region 8, headquartered in Surat Thani, orders them to go, Col Peerayuth said.

“Officers from other provinces, including Surat Thani, Patthalung and Trang, have been sent to support the Nakhon Sri Thammarat police,” he added.