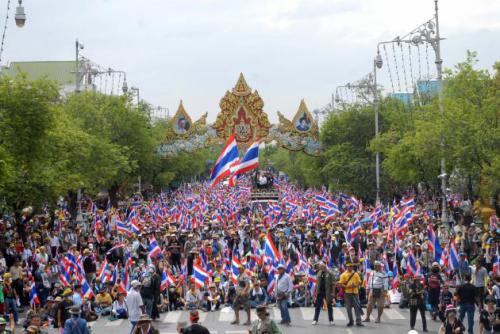 
Push for amnesty has ended: PM
The Nation / Phuket Gazette
PHUKET: As opposition rises and protests spread to key areas of capital, govt withdraws all six draft bills from the house

The embattled Pheu Thai government yesterday yielded further to the spreading public outrage over the bill for blanket amnesty by withdrawing all draft amnesty bills from the legislature, except the one to be debated by the Senate today.

The move came after many groups of people staged protests at different locations in Bangkok, some even moving into the area where the Internal Security Act (ISA) has been imposed by the Cabinet and some even calling on the government to “get out”.

The Network of Students and People for Thailand’s Reform, which yesterday moved their protest closer to Government House, now plan to campaign for the Yingluck government’s ouster, according to group leader Uthai Yodmanee.

A number of people yesterday also called on the prime minister to dissolve the House of Representatives and call a new election to “return the power to the people”. These included Ramkhamhaeng University rector Wuthisak Lapcharoensap and a number of senators.

Senate Speaker Nikom Wairajpanit brought forward a meeting of the upper house today, from next Monday, to discuss the amnesty bill passed last week by the House of Representatives.

A source from the group of 40 senators said yesterday that they would not attend the meeting today in order to deprive it of quorum.

Bangkok Senator Rossana Tositrakul said there was an attempt to undermine the protesters’ legitimacy by rushing the Senate debate to approve the original amnesty bill proposed by Pheu Thai MP Worachai Hema. The original bill seeks amnesty for protesters who committed criminal offences during the recent political conflicts.

Prime Minister Yingluck Shinawatra affirmed yesterday that all draft bills related to amnesty have been withdrawn from the legislature. “I want to alleviate the people’s concern – the amnesty bill has already been dropped and all amnesty-related drafts are withdrawn,” she said.

The embattled premier has made statements on three successive days since Tuesday on the amnesty bill, aiming to pacify the anti-amnesty protesters.

She said her Pheu Thai Party had sought and received House approval to remove the draft legislation on political clemency. “The people should rest assured that the push for amnesty has ended,” she said.

Yingluck said there was no truth to the allegation that the amnesty bill was designed to void corruption cases. She also dismissed concerns that her government would crack down on the protests.

The prime minister said she wanted to see the restoration of peace and a return to normalcy. Therefore, only police were deployed to keep the peace, she said.

There were no plans to deploy soldiers to control the crowds, she said, pledging not to use force to disperse the rallies. She called for an end to the street protests. “My government will not do anything contrary to the people’s feelings,” she said.

She urged her opponents to submit their demands and grievances to the government instead of protesting on the streets.

In removing his draft, Sonthi said he wanted the political conflict to end. “The country will become extinct should divisiveness persist,” he said, urging all sides to talk and forgive each other.

The remaining four bills were sponsored by Pheu Thai MPs.

Yesterday, thousands of Thammasat University lecturers, staff members and students marched from their Tha Phachan campus to the United Nations office on Rajdamnoen Road to show their opposition to the amnesty bill.

Meanwhile, Air Force commander-in-chief ACM Prajin Jantong yesterday commented that the government’s retreat over the amnesty bill appeared to have reduced the political temperature. He suggested that a law should be written in a way that respects the legal principle and the public sentiment.


Political protests to take a toll on GDP growth: UTCC
The Nation / Phuket Gazette
PHUKET: Gross domestic product growth could reach only 3.3-3.4 per cent, short of the forecast of 3.5 per cent, if the political tensions smoulder till the end of the year, the University of the Thai Chamber of Commerce said.

“The government needs to solve the problem soon, as the political conflict is a key factor in destroying consumer confidence, tourism growth and investment. And it would hit the economy severely,” Thanavath Phonvichai, director of the university’s Economic and Business Forecasting Centre, said yesterday.

Consumer confidence has plunged to its lowest level in 19 months, amid concern over demonstrations against the blanket amnesty bill.

The Consumer Confidence Index has drifted down for the seventh month from 77.9 points in September to 76.6 last month. Other confidence indices and spending power also fell to their lowest in almost two years.

The expected drag on economic growth would come mainly from the fall of 5-10 per cent of foreign visitors and the loss of Bt10 billion-Bt20 billion from their spending.

The economy next year would expand only 4.8-5 per cent instead of 5.1 per cent.

Based on 1,200 survey responses, if the demonstration is prolonged to the end of this year, and some serious conflict arises, the economy would expand by only 3-3.2 per cent this year, or Bt30 billion to Bt60 billion less than it should have, as arrivals would drop 10-20 per cent.

Economic growth next year would be only 4.8-5 per cent.

In the worst-case scenario, growth could go down to 3-3.2 per cent this year and recover to only 4.5-4.7 per cent next year, if the political mess extends into next year.

The ball is now in the government’s court. It could do its best to calm down the situation if it was still worried about the economy.

“The lower confidence and the current chaos were caused by an unnecessary event. The government needs to fix the situation as quickly as possible. Confidence has dropped to nearly the lowest point of the political turmoil in 2010,” he said.

Saowanee Thairungroj, president of the university, said the poll suggests that the government should withdraw the amnesty bill as the best solution to end the current political strife.

Other possibilities are to amend the draft bill, create a better understanding of the proposed act, conduct a public survey before passing the bill and focus more on economic growth.