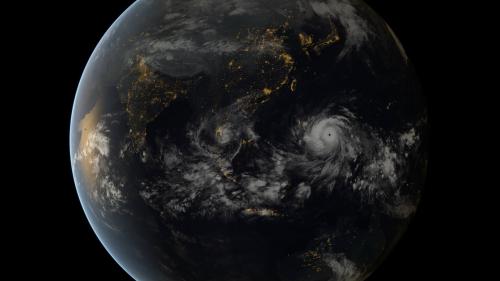 PHUKET: Typhoon Haiyan, the strongest storm on earth this year, slammed into the Philippines’ central islands on Friday forcing millions of people to move to safer ground and storm shelters, cutting power and phone lines, and grounding air and sea transport.

The maximum category-five super typhoon, with destructive winds gusting of up to 275 kph (170 mph), whipped up giant waves as high as 4-5 metres (12-15 feet) that lashed the islands of Leyte and Samar, and was on track to hit holiday destinations.

“We are fearful because there is talk that the sea will rise,” an elementary school teacher in Southern Leyte province who only gave her name as Feliza told a local radio station.

“We can feel the powerful winds, our school is now packed with evacuees. Trees in coastal areas have already fallen.”

About a million people are in shelter areas in more than 20 provinces, after Philippine President Benigno Aquino on Thursday appealed to people in Haiyan’s path to evacuate danger areas, like river banks, coastal villages and mountain slopes.

Haiyan is forecast to pass just north of the Philippine’s second largest city Cebu, home to around 2.5 million people.

Schools, offices and shops in central Philippines were closed, with hospitals, soldiers and emergency workers on standby for rescue operations.

The state weather bureau said Haiyan, locally known as Yolanda, is expected to exit the Philippines late on Saturday and then move into the South China Sea.

In September, category-five typhoon Usagi, with winds gusting of up to 240 kph (149 mph), battered the northern island of Batanes before causing damage in southern China.

PHUKET: Anti-aircraft gunfire and grenade blasts erupted in several parts of Tripoli late on Thursday, the second time this week that the Libyan capital has been rocked by fighting between rival militia groups.

A security source told Reuters a heavily-armed group had entered the capital to take revenge for one of its fighters who was killed in a shootout in Tripoli on Tuesday.

Two years after the fall of Muammar Gaddafi, militia that helped oust him now control large part of the North African country and regularly fight each other.

On Tuesday, rival gunmen battled for hours on the capital’s streets. Three people were wounded and one later died – prompting the revenge attack, the source said.

On Thursday, fighters in a Toyota truck mounted with an anti-aircraft gun shouted “Allah Akbar” (God is great) while driving at great speed near the foreign ministry.

Tracers from anti-aircraft guns could be seen marking targets in the eastern Suq al-Juma district and several other parts of Tripoli, followed by loud explosions.

Shooting with rocket-propelled grenades could be also heard near the foreign ministry and state television building in a central coastal district.

PHUKET: Russian is to press additional charges against several Greenpeace activists who were arrested for a protest at the country’s first offshore Arctic oil rig, investigators said on Thursday.

Russia has drawn international criticism over the arrest of 30 people on a Greenpeace ship after activists tried to scale the Gazprom-owned Prirazlomnaya oil platform.

Russian investigators initially charged everyone on board the Greenpeace ship Arctic Sunrise with piracy but said last month they were changing the charge to hooliganism, cutting the maximum jail sentence they face to seven years from 15 years.

Vladimir Markin, a spokesman for a state investigative team which reports directly to Russian President Vladimir Putin, said some of the activists, in addition to being charged with hooliganism, will face charges of resisting law officers, which would carry a maximum five year-prison sentence.

“A few boats approached the platform, and with the aid of special equipment, they tried to climb up the platform. They completely ignored the authorities’ orders. Furthermore, if you recall, they rammed the coastguard ship,” Markin said in an interview on Internet news site gazeta.ru.

Russian authorities have held the 28 activists and two freelance journalists, as well as the Dutch-registered Arctic Sunrise, in the Arctic city of Murmansk.

The Netherlands has asked the International Tribunal for the Law of the Sea in Hamburg to order Russia to release the ship and all those detained.

Russia has said it does not recognise the case, accusing the activists and their ship of posing a security threat.

A Dutch government representative said Russia had “violated the human rights” of the activists who tried to climb onto Russia’s first offshore Arctic oil rig in September, detaining them for seven weeks “without grounds”.

After the protest, Russian coastguard officers boarded and seized control of the ship and towed it to Murmansk. Russia has rejected Greenpeace’s assertions that the ship had been in international waters when it was seized.

Strains between the Netherlands and Russia over the Greenpeace protest look to overshadow the arrival of Dutch King Willem-Alexander and Queen Maxima to Moscow on Friday to mark 400 years of diplomatic ties between the two countries.

Greenpeace activists said their protest was aimed at raising awareness about the risks that Arctic offshore oil drilling posed to thousands of kilometres of coastal areas.

The head of Greenpeace Kumi Naidoo offered on Wednesday to move to Russia and stand as security for the release on bail of 30 people.

PHUKET: Israel said on Thursday it did not poison Yasser Arafat, making the denial after the Palestinian leader’s widow said Swiss forensic tests had proven he died from radioactive polonium poisoning in 2004.

“We never made a decision to harm him physically,” Energy Minister Silvan Shalom, who in 2004 served as foreign minister and as a member of Israel’s security cabinet, told Israel Radio.

“In my opinion, this is a tempest in a tea cup. But even if it was (poisoning), it certainly was not Israel. Maybe someone else inside had thoughts or an interest to do it.”

In the occupied West Bank, a senior member of the Palestine Liberation Organization issued a new call for an intern