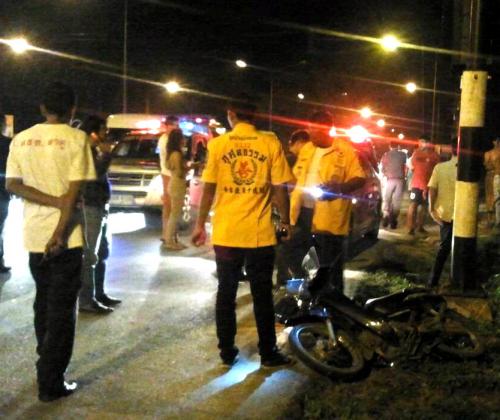 PHUKET: A British national was charged with reckless driving causing death after she allegedly forced a 17-year-old student on a motorbike off the road into a utility pole.

According to witnesses, Faye Louise Taylor, 39, made a left-hand turn from Thepkasattri Road toward Nai Yang Beach at just past midnight today, cutting off Patiphan Lawan.

The 17-year-old Mr Patiphan, who was not wearing a helmet, lost control of his motorbike in an attempt to evade Ms Taylor’s car. Mr Patiphan then crashed into a nearby utility pole, explained Lt Chatree Chuwichian of the Thalang Police.

Mr Patiphan was rushed to Thalang Hospital with a serious head injury. He was later moved to the better equipped Vachira Phuket Hospital. However, doctors were unable to save him, said Lt Chatree.

“About 20 meters from the crashed motorbike, we found Ms Faye inside her car in a state of shock,” said Lt Chatree.