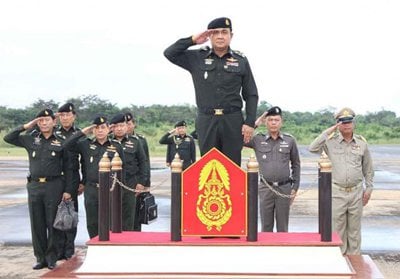 All sides vying for military support

Phuket Gazette / The Nation
PHUKET: In the face of a political tug of war, the opposing camps are trying to claim the military as a prize trophy.

It is strange but true that the army is a fixture in the political landscape even though all leading figures, including the top brass, keep saying troops should remain in their barracks.

The struggle between then prime minister Thaksin Shinawatra and his opponents in 2005 ended up in a coup the following year.

After the junta faded out in 2007, political strife escalated under successive civilian governments from 2008 to 2010. The yellow shirts were involved in street protests, culminating in the October 2008 bloodshed and the seizure of Don Mueang and Suvarnabhumi airports a month later.

The red shirts descended on the streets in 2009 and 2010 causing tragic losses in a number of violent incidents.

Two former Army chiefs, General Sonthi Boonyaratglin and General Anupong Paochinda, were key players in the political strife. And the incumbent holder of the Army torch, General Prayuth Chan-ocha, is balancing on a tightrope in order to keep his troops from taking sides in the prevailing polarization.

Will he succeed where his two predecessors failed? More importantly, how long can he steer clear of polarization when all sides have already viewed the military under various shades of political color?

The red and yellow shirts, as well as the opposition Democrat and ruling Pheu Thai parties, all play up the military card for the sake of political expediency.

Despite a clear voting outcome in the 2007 general election, the anti- and pro-government camps are gearing for a showdown over issues like reconciliation and charter change, which are linked to the granting of an amnesty for Thaksin.

Prayuth is right at the vortex of a brewing political storm. The Pheu Thai Party and its red-shirt allies are determined to push for a charter rewrite, which will in turn generate Thaksin’s amnesty. The opposition movement, comprising the Democrats and yellow shirts, is equally firm on pulling the plug on an amnesty for Thaksin.

Tension has been building up, as evidenced by the mushrooming of politically-motivated litigation and the increasing number of political rallies. The actual showdown between the anti- and pro-government camps should coincide with the planned referendum vote on new charter next year.

The pro-government camp has been keeping Prayuth on a tight leash through handlers like Defence Minister Sukumpol Suwanatat and red-leaning Defence permanent secretary General Sathian Permtong-in.

The red-shirt leaders, including Jatuporn Promphan and Kokaew Pikulthong, often rely on anti-coup comments to rein in the military.

The anti-government camp, particularly the People’s Alliance for Democracy, has reminded the military of its sacred duties to safeguard the country and uphold the monarchy, in a bid to sway the soldiers to its side.

Last week the Democrats voiced disappointment at Prayuth and other top commanders for siding with the government on the issue of NASA’s request to conduct climate research from U-tapao airbase.

Faced with increasing volatility, Prayuth appears to have adopted a survival strategy of sweet-talking to all sides while keeping true options close to his chest.

He has dispatched his deputy, General Dapong Ratanasuwan, to keep the opposition happy, and designated his chief-of-staff, General Sirichai Distakul, to keep an eye on political developments and work with the pro-government camp.

Under his watch, the Internal Security Operations Command has meanwhile turned blind while the opposing camps are building up mass movements to sway public sentiment.

Unfortunately, he appears to have chosen the role of an uninterested observer awaiting retirement, instead of giving his all to end the bitter social division.

Phuket Gazette / The Nation
PHUKET: A weather research project proposed by the US National Aeronautics and Space Administration (NASA) may not get a chance to take off from U-tapao this year, as Foreign Minister Surapong Towichuk-chaikul said yesterday the Cabinet was likely to decide today to put the proposal to Parliament.

“To ensure it is clear, I think the government should put it through the Parliament in accordance with Article 190 of the Constitution,” Surapong told reporters.

Putting the proposal to Parliament would delay the project. NASA had hoped to use three weather surveillance aircraft in August and September this year. But Parliament doesn’t have its next session till August 1. The government is authorized to put the proposal on the agenda for the next session but it would take time to process it.

If the government did not put the NASA project to Parliament, the opposition or Senate might ask the Constitution or Administrative Court to rule whether allowing it to go ahead was unconstitutional, Surapong said. If the proposal was involved in a legal dispute, it would be delayed, he said.

The Council of State and the Foreign Ministry’s Treaties and Legal Affairs departments suggested earlier that the NASA project did not need approval from the Parliament since it involved no change in territory or sovereignty over territory.

The NASA research project became a hot political issue after the opposition Democrat Party accused the government of offering U-tapao to the US in exchange for a visa for former prime minister Thaksin Shinawatra. It demanded the government debate the issue in Parliament for transparency.

Many lawmakers said the project might have some implication on national security as the US might have a hidden agenda or a military desire to contain China in the Asia-Pacific region.

The NASA project was mixed up with a Pentagon idea to use U-tapao as humanitarian assistance and disaster relief training and readiness center. The idea is still far from fleshed out as Thai and US officials only agreed in Washington recently to set up a working group to jointly develop the plan to explore possibilities to set up such a center.

The Washington Post reported on Sunday that the Obama administration revamped its Asian strategy in response to a rising China, and that the military was weighing a return to some familiar bases from its last conflict in Southeast Asia, the Vietnam War.

The lack of information has bred suspicion in the Thai media and among opposition lawmakers, who have held up a separate project that would allow NASA to operate climate-change surveillance flights from U-tapao this fall, it said.

Surapong yesterday discussed the NASA project with US Ambassador to Thailand Kristie Kenney to inform her about the government’s decision and the Thai constitutional process.

Ambassador Kenney insisted that the climate project was purely scientific and that NASA is a civilian agency with no connection to the military. The result of the research would be released to the public and all people could access it, she said. However, the US respected the Thai government’s decision and the cooperation between the two countries in many fields would continue, she said.

Surapong said he was not sure if the project could begin next year as time for this year was running out.

Indeed, the project was raised back in September 2010 during the Democrat governmen