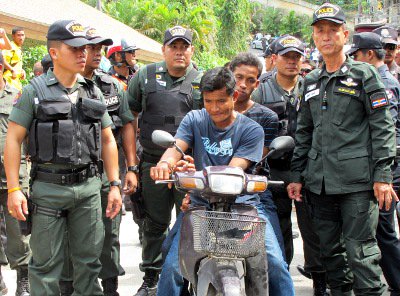 PHUKET: Surasak Suwannachote, the man who earlier today confessed to stabbing Australian travel agent Michelle Smith, told a press conference after the re-enactment of the crime that he had no idea what he was going to spend the money on.

“I just wanted to steal the money. I had no idea what I was going to do with it,” Surasak told the press.

“I didn’t even want to stab the woman [Mrs Smith], I just wanted to cut the strap to the bag. I didn’t know she was going to die. I saw her walking away,” he said.

Surasak told the press that at the time of his arrest that his conscience was already playing on him.

“I saw on the news that the woman died. I am sorry for what happened. When the police arrested me I was already considering handing myself in,” he said.

Surin Thatthong, who drove the motorbike used in the attack, remained silent throughout most of press conference this morning.

Dressed in a knockoff Billabong t-shirt, the former employee of a local tyre repair shop broke his silence only once to say “I’m sorry.”

To vote in the latest poll about how best to improve tourist safety on the island click here.