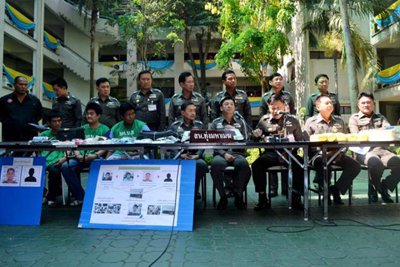 Drug-crime busters accused of possessing drugs
PHUKET (The Nation): Four drug-crime busters were arrested by fellow police after they allegedly made an arrest and seized drugs, but failed to report them to a supervisor, let the suspect go and kept the drugs, city police chief Pol Lt General Winai Thongsong said yesterday.

The suspects said they would testify only in court.

The four police and their civilian accomplice face charges of having ya ba and ya ice in their possession with intention to sell, Winai said.

Police claim their investigations found the four officers had seized the drugs in the Metropolitan Police Region 3’s turf – date and location remains sealed pending investigation into the drugs’ origin and arrest of more suspects – but kept the drugs in their personal vehicles and didn’t report to their supervisor, Winai said.

The suspects maintained their innocence and said they would testify only in court, Winai said. The Metropolitan Police Bureau has already had the four officers dismissed from the civil service, Winai said. He warned other police that if they were found to be involved in drug trafficking they would be severely punished under both the disciplinary and criminal codes.

Narcotics Suppression commissioner Pol Lt-General Chaiwat Chotima said he wanted these arrests to be an example to let drug suppression police officers know that if they were involved with drugs directly or indirectly, their supervisors would punish them severely.

A source reported that when the drugs were smuggled from the North, the Narcotics Suppression police were keeping an eye on the drug-dealing group and preparing to make the arrest. However, Pol Lieutenant Cherngchob’s special team for drug suppression, following previous drug retailer arrests, cut in front of them to make the arrest at a Min Buri condominium.

Hours passed but the arrested suspects and the seized drugs were not revealed to face legal procedure and the arrests were not reported to their supervisors. The Narcotics Suppression police contacted the Metropolitan Police to investigate, leading to the arrest of the five suspects. Police are now looking for another suspect who fled.

The source reported that Pol Lieutenant Cherngchob’s special team has a record of satisfactory achievements in drug suppression. But on this occasion, they reportedly let the drug suspect go after the arrest, claiming in a report that the suspect asked to make a phone call to relatives at the condominium’s ground floor and fled.

In Pathum Thani’s Lam Lukka district, police yesterday raided a townhouse to find 20kg of ya ice and 1,020,000 ya ba tablets, but declined to elaborate.