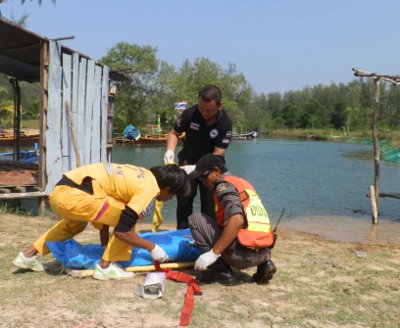 PHUKET: The body of a fisherman was found dead along the banks of a mangrove estuary on the west coast of Phuket yesterday.

Cherng Talay Police were notified of the death by residents of Baan Layan at about 10am yesterday.

At the scene, a muddy riverbank near the north end of Layan Beach, they found the body of 52-year-old Praphat Plotphai lying face up. His left eye was missing and there was a wound above the eyebrow on the same side.

Relatives of the deceased said the wounds were likely the result of feeding crabs, or some other marine life.

They doubted the possibility of assault, because Mr Praphat never had any confrontations with anyone, they told police.

Mr Praphat set out on foot every night with a net in hand to trap fish in the estuary, they said.

Police suspect Mr Praphat went into the klong as usual, the night before, but either fainted or suffered a cramp or seizure, then drowned.

They estimated the time of death at about 5am the same day.

As relatives did not request an investigation, police under order of Thalang Police duty officer Passakorn Sonthikul turned the body over to Phuket Kusoldharm Foundation workers for transport to Thalang Hospital, where it will be stored until the relatives arrange funeral services.

Eerie silence cloaks the Phuket death of a Swedish tourist