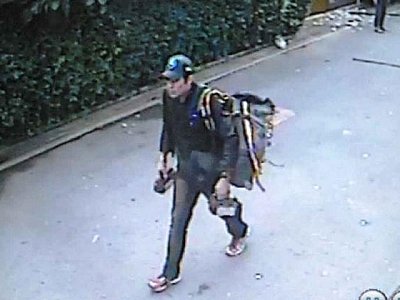 An Iranian man was badly injured and a second Iranian was arrested after a series of grenade attacks that caused panic in the capital and left five bystanders injured yesterday.

A senior official denied any links to terrorism, but police have yet to rule on whether the blasts were part of a terrorist attack, or if they had anything to do with last month’s arrest of a Lebanese man with Swedish nationality in an alleged bomb plot.

In related news, the British Embassy in Bangkok issued a travel advisory within hours of the explosions, the first one of which took place at 2pm at a house rented by three Iranians. And BBC reported that the suspect had arrived in Bangkok from Phuket.

Police said that after the first explosion, the three men ran from the house, and one of them, initially identified as Saeid Moradi, tried to hail a taxi. When the taxi did not stop to pick him up, he threw a grenade at it, only to have the grenade bounce back and explode, severing his legs.

Shrapnel wounded five adult passers-by, but did not harm any students at nearby Kasem Phitthaya School.

Police officers provided conflicting reports about the location and sequence of events.

Khlong Tan police chief Sitthipharb Baiprasert said Moradi ran to the front of a school and aimed a grenade at police officers, but ended up bearing the brunt of the blast himself. However, deputy Bangkok police chief Phisit Phisutthisak said the suspect threw the grenade at a taxicab.

Another senior commander, Pol Maj-General Wichai Sangpraphai, was quoted by deputy secretary-general to the PM Thitima Chaisang as saying the suspect was not injured by the grenade he threw at the taxi, but lost one leg and badly injured another when a second grenade aimed at a police vehicle exploded.

A report in the Thai-language Manager website said the suspect tried to slit his own throat with a sharp piece of glass, but was stopped by police.

Doctors at Chulalongkorn Hospital said the suspect had lost his right leg and sustained injuries to an eye and his abdomen. They have also had to amputate his left leg.

“He has serious wounds but he should survive,” deputy hospital director Dr Ratthaphlee Phak-at said.

Police later said they arrested Mohammad Hazaei, 42, one of the Iranian men, at Suvarnabhumi Airport as he was about to board a flight to Kuala Lumpur. He is under interrogation. The third man remains at large.

A search at the rented house turned up an unspecified amount of C-4 explosive and some home-made bombs, Bangkok police chief Pol Lt-General Winai Thongsong said.

In Moradi’s backpack, police found clothing; receipts issued to a Yasef Moradi by a hotel in Pattaya; 8,500 baht and US$2,800 in cash; and a large amount of cash in Iranian currency.

Thitima denied the incidents were acts of terrorism, saying: “This is not sabotage or related to the travel advisories issued [after last month’s terrorism scare] by many countries. Police now know where the [suspect is].

“Intelligence analysis said [the suspects] were arguing with one another, and the incidents are being treated as normal crimes.”

Foreign Ministry spokesman Thanee Thongphakdee said an official conclusion on the incidents would be made soon to determine the specific nature of the crimes.

“Don’t jump to the conclusion that it was an act of terrorism,” he said.

A briefing by the National Security Council is being held this morning at Government House.

Thitima said Prime Minister Yingluck Shinawatra had instructed the Foreign Ministry to contact the Iranian Embassy to discuss the issue and obtain details about the three men.

Police last month arrested Atris Hussein, a Lebanese man with Swedish nationality whom they said had ties with Hezbollah, an Iranian-backed group based in Lebanon, and suggested he might have been involved in setting up a terror plot in Thailand. Hezbollah later denied links with Hussein.

Taxi driver Sanchai Bunsoongnern said the suspect had tried many times to hail a taxi but none stopped.

“He threw a grenade at me. It dropped on the hood, fell on the road and rolled underneath my taxi, and went off. I stopped and helped to chase him,” he said.

“A police car then showed up, before the suspect took something out of his pocket, followed by a loud bang, severing his legs. I was 15 metres away from the second blast, and suffered no injuries, but my ears are ringing.”

Americans have been alerted to maintain heightened awareness.

Reuters reports Police General Bansiri Prapapat as saying that, “We discovered the injured man’s passport. It’s an Iranian passport and he entered the country through Phuket and arrived at Suvarnabhumi Airport on the 8th of this month.”

PHUKET (News Wires): The US Embassy in Thailand issued a statement alerting its citizens to maintain a heightened awareness when in public following a series of explosions in Bangkok yesterday.

“Be alert for unattended packages/bags in public and report any suspicious behavior to the nearest law enforcement personnel,” the statement on its website reads.

Americans are urged to to regularly monitor the Department’s Bureau of Consular Affairs website, where current Worldwide Cautions, Travel Alerts, Travel Warnings and health-information can be found.

We encourage you to notify us of your presence in Thailand by enrolling in the Department of State’s Smart Traveler Enrollment Program (STEP).