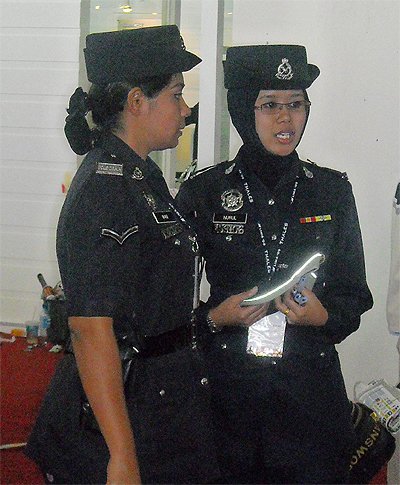 The Star, the country’s largest newspaper, reported that the couples were arrested at budget hotels in the Malaysian city of Petaling Jaya in the state of Selangor. The raids began at 12:30am local time and continued throughout the night, concluding at around 4 am local time.

The five couples were arrested by officers from the Selangor Islamic Affairs Department (Jais) for alleged khalwa, an Islamic law that prevents unmarried Muslims from “being alone” with someone of the opposite sex. Those arrested were identified as men and women between the ages of 20 and 30, the report said.

If convicted, those arrested yesterday face a jail sentence of up to two years and a fine of up to 3,000 Malaysian ringgit (approx US$984).

Last year, during an operation called Ops Valentine, the Islamic morality police in Malaysia arrested more than 80 people for alleged khalwa. Another 61 people were also hauled up for “indecent behavior” and were enlisted for counseling sessions with the department.

In 2005, Malaysia’s Islamic authorities issued a fatwa to prevent Muslims from celebrating Valentine’s Day since it is associated with “vice activities” that are prohibited in Islam.

The European Commission cleared under the EU Merger Regulation the proposed acquisition of smartphones and tablets developer Motorola Mobility by Google, the world’s largest internet search and web advertising company, and the developer of Android, which is one of the most popular mobile operating systems.

According to the Commission, the transaction was approved “mainly because it would not significantly modify the market situation in respect of operating systems and patents for these devices.”

“We have approved the acquisition of Motorola Mobility by Google because, upon careful examination, this transaction does not itself raise competition issues,” said Joaquín Almunia, Commission Vice President in charge of competition policy. “Of course, the Commission will continue to keep a close eye on the behavior of all market players in the sector, particularly the increasingly strategic use of patents.”

“We’re happy that today the European Commission approved our proposed acquisition of Motorola Mobility, which we announced in August,” Harrison stated through the company’s official blog. “This is an important milestone in the approval process and it moves us closer to closing the deal.”

Noting that the transaction is now waiting for decisions from other jurisdictions, Harrison underlined that the combination of Google and Motorola Mobility will help “supercharge” Android and enhance competition, as well as offer consumers “faster innovation, greater choice and wonderful user experiences.”

The estimated 22.5 billion transaction was first notified to the European Commission on November 25, 2011, prompting a review which has been carried out in cooperation with a number of competition authorities and in particular with the U.S. Department of Justice (DOJ). The DOJ, meanwhile, is expected to make its decision regarding the transaction later this week.

In its acquisition, Google is looking to take advantage of Motorola’s 17,000 patents, as well as its 7,500 pending patent applications.

As all smartphones and tablets need an operating system, the Commission’s investigation considered whether Google would be likely to prevent Motorola’s competitors from using Google’s Android operating system and showed that Android helps to drive the spread of Google’s other services.

Consequently, given that Google’s core business model is to push its online and mobile services and software to the widest possible audience, the Commission stated, it is unlikely that Google would restrict the use of Android solely to Motorola, a minor player in the European Economic Area (EEA) when compared to operators such as Samsung and HTC.

PHUKET (News Wires): The main suspect behind the deadly bombing which hit the Indonesian resort island of Bali in 2002 faced the start of his first trial on Monday, local media reported.

Umar Patek, 44, who is also known as Abdul Goni and Abu Syiekh, was one of the most wanted terrorists in the Southeast Asian country for the first Bali bombing in 2002 that killed 202 people, including 88 Australian nationals and other foreign citizens. On Monday, he showed up at the West Jakarta District Court for his first trial.

On January 25, 2011, Patek, whose role in the attack was first signaled out by other fellow terrorists who had been previously arrested, was detained in Abbottabad, Pakistan almost 10 years after the attack and only a few weeks before U.S. security forces killed former al-Qaeda leader Osama bin Laden in the same area.

Pakistani authorities later extradited Patek back to Indonesia in August 2011. He arrived at court wearing a white taqiyah – a traditional Muslim cap – as well as a white tunic. After descending from an armed vehicle and entering the heavily guarded court building, he smiled at cameras until being seated in front of the five judge panel.

The panel, which is led by Lexsy Mamonto, is made up of five judges, two more than the usual three. In addition, over 250 security officers were deployed to safeguard the court building as the trial has been brought to the attention of both national and international media.

Patek, who had been placed under the United States’ Rewards for Justice program with a 2 million reward for his capture, is facing a number of charges, which could lead to a sentence of life imprisonment. Among those charges are premeditated murder, bomb-making, and possession of firearms.

The suspect’s defense lawyers requested a week to respond to the charges, arguing that they are disproportionate from the truth. In addition, Patek has been linked to a series of bombings in the Indonesian capital of Jakarta, which led to the deaths of at least 18 people.

Patek is believed to be a member of a group which carried out military and fighting exercises in Afghanistan and Pakistan in the 1980s and 1990s. He later formed Jemaah Islamiyah and then organized a series of suicide bombings targeting nightclubs, restaurants, hotels, offices and embassies of Western countries in Indonesia.

Previously, Imam Samudra, Amrozi bin Nurhasyim and Ali Ghufron, were convicted of being involved in the Bali bombings and later executed in 2008.

After the Bali bombing, Patek was believed to have fled to the Philippines but was later arrested in Pakistan. Despite his eventual capture, Patek’s arrest in Pakistan has raised questions about Indonesia’s security and how the top terrorist fugitive could have fled the country in the first place.