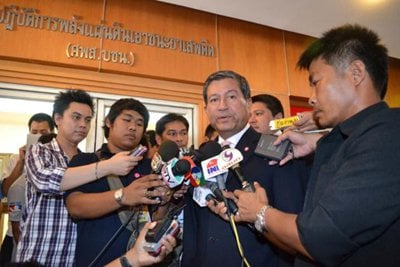 PHUKET (The Nation): A legal study is underway on orders from Deputy Prime Minister Chalerm Yoobamrung to determine whether drug-related convicts on death row can be executed within 60 days after final verdicts have been reached.

Chalerm says a new regulation stipulates that verdicts in drug-related convictions are regarded final at the Court of Appeals, not the Supreme Court as in all other charges. A legal study is working to find out whether immediate execution would violate the Constitution or the convicts’ right to appeal for a Royal pardon, or any other laws, he says.

“If immediate execution – which I think should be done within 60 days after the final verdict [by the Court of Appeals] – is approved after the study finds it is lawful, a bill will be submitted to Parliament for amendment to put it into effect,” he said yesterday.

Under Thai law, convicts condemned to death for all other crimes in the lower court have three chances to appeal against execution, through the Court of Appeals, the Supreme Court and royal pardons.

Chalerm said it was not widely known that drug-related convicts sentenced to death by the lower court and the Court of Appeals presently had no right to seek a third chance with the Supreme Court.

“The process for the changes [excluding the Supreme Court step] began when I was the justice minister [in 1996 in the Banharn Silapa-archa government].”

In practice, a large number of convicts guilty of other crimes and drug-related cases on death row are not often executed immediately, awaiting their turn for years after Royal pardons do not favour them.

Chalerm said he would visit China today and would meet with anti-narcotics agencies there to discuss bilateral policies against drugs, which were now transported along the Mekong River in addition to land routes. He said Burmese and Thai authorities were cooperating closely to combat drug abuse and dealing.

Chiang Rai police have arrested two suspects and seized 1,736,000 amphetamine tablets along with 37 kilos of crystal methamphetamine, or “ice”. They also yesterday found and seized 13 kilos of “ice” abandoned in a botched deal between local traders.

The Chief Justice of the Criminal Court, Justice Thawee Prachuaplarp, echoed Chalerm’s policy on the executions within 60 days, saying the judiciary could not simply stay put over rampant drug dealing after the administration was taking serious action.

“Following the government’s heightened suppression, if the Criminal Court still hands the same penalties to drug-related convicts, damage would be done to the entire justice system,” he added.

The criteria for handing down a death sentence to convicts has also changed, with those having only 10,000 amphetamine tablets now facing death, instead of 20,000 tablets as before. Judges considering arrest and search warrants will cooperate with police and anti-narcotics officials to speed up the process.

Drug users and addicts, normally granted leniency and considered victims rather than criminals, will now face harsher penalties in case of repeat offenders, while first-time offenders will still be eligible for rehabilitation and other measures, said Thawee.

Nationally, the number of drug-related trials increased to 8,787 last year, up from 6,004 the previous year, he said.