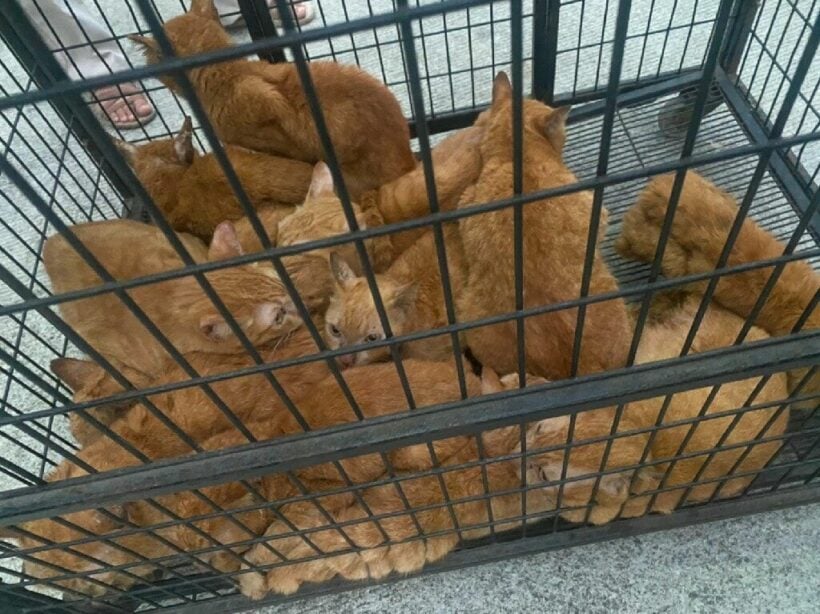 Over 20 cats were found starving inside a locked house yesterday in Samut Prakan province, just south of Bangkok. Activists from the non-profit organisation Watchdog Thailand saved 17 of the cats while four escaped and a total of five dead cats were found inside the house. The cats are now being cared for at Watchdog’s shelter.

Villagers contacted Watchdog Foundation Thailand after hearing cats howling loudly and smelling a foul smell coming from a house in Pruksa Village 74/3 in Samut Prakan. Disturbed by the smell, the villagers went to check on the house to find many malnourished cats sitting by the sliding glass doors. The cats looked like they had been starving for months, villagers said to Watchdog.

Watchdog rang the owner of the house who said it was inconvenient for them to travel there. The owner gave Watchdog permission to find a locksmith to open the door so they could rescue the cats.

A disgusting smell pervaded the two-storey house which was covered in cat faeces on both floors. Watchdog found over 20 ginger cats in a state of starvation. On the second floor, two dead cats were found inside a room with the door closed. Three more dead cats were found inside the house. During the rescue, four cats escaped. Watchdog took the 17 cats to the foundation’s shelter to be cared for. The Watchdog team is figuring out what to do next.

One neighbour told reporters that the cats’ owner doesn’t stay in the house and comes back irregularly to feed them. The neighbour said the cats get hungry and cry loudly. The neighbour has had to call the owner on many occasions to ask them to come and feed the cats. This time, the owner didn’t return for a long time so the neighbour decided to ask Watchdog for help.

gazmo16
What is wrong with some people ? How do you leave animals to starve to death and still sleep at night !
HolyCowCm
Was on the Thai News yesterday or the day before. Is this a cat breeding farm? Any way it is the owner that must face legal action for this as is totally unacceptable for any life. What next, shave the…
gazmo16
I think you are probably right with the breeding farm idea as they all seemed to look very similar. Many breeding farms are notorious for their ill treatment of the animals as it's just a money making business