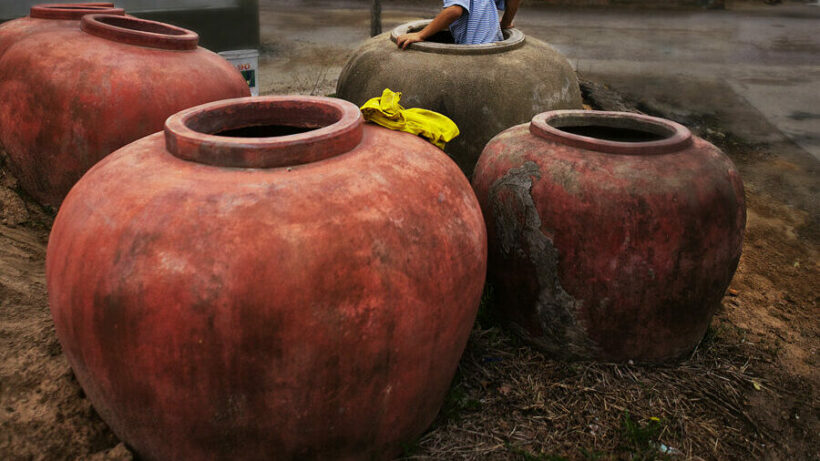 Today, a suspected drug dealer and a teenager were both arrested in southern Thailand’s Nakhon Si Thammarat. 34 year old Sakrin Phitchalad was arrested in Tha Sala following police complaints that drug dealing was taking place in the area. The dealer was found hiding in a giant clay jar.

An hour later, police also arrested the suspected drug dealer. Sakrin had concealed himself in a jar like what is often seen in Thai horror films. Police also seized 44 amphetamine tablets and 2 bags of methamphetamines in the container with Sakrin.

Thai media captured the smiling suspected criminal half sticking out of his hiding spot with a big grin plastered on his face. It can be seen here.

Sakrin and the unnamed teenager were brought to the Tha Sala Police Station for further legal proceedings. It was not clear if the teenager was also a suspected drug dealer.

Last month, 2 suspected drug dealers were arrested in Nakhon Si Thammarat. Albeit neither were caught hiding in jars. Prior to that, in March a backhoe discovered something else hidden: 100,000 baht buried underground.

Dedinbed
38 minutes ago, Thaiger said: The dealer was found hiding in a giant clay jar Pot luck he'd get away with it I s'ppose .. can we call him Jarhead now ..
DiJoDavO
Thai media captured the smiling suspected criminal half sticking out of his hiding spot with a big grin plastered on his face.  More like that awkward smile you do when your kid says something rude to you outside, but you…