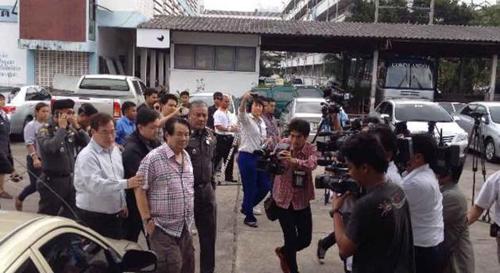 His son, Sonthaya, looked tense and grim while talking on the phone about his father’s arrest.

Somchai was picked up by police when his Lexus stopped at the Pattanakarn expressway toll gate. He was understood to have been visiting his doctor at Samitivej Hospital’s Pattanakarn branch.

Found in his car were medicines for heart disease and high blood pressure. However, the medicine bags were in the name of Kim Sae Tang, the identification he gave to the hospital to receive treatment.

Under the seats, police found a shotgun and six bullets.

Somchai, former mayor of Tambon Sansuek administration in Chon Buri and a very influential figure in Pattaya, was sentenced to 25 years in jail by the Supreme Court in 2004 for masterminding the murder of Tambon Tha Samet Kamnan Prayoon Sitthichoke at a wedding party in March 2003.

He was taken to the Crime Suppression Division head office in Soi Chokchai 4 for questioning.

Somchai and another defendant, Passakorn Homhuan, 44, failed to show up for the reading of the verdict last year, so the Supreme Court read its ruling in their absence and issued arrest warrants for them.

On June 21, 2004, the Criminal Court sentenced the two men to 25 years each in jail after finding them guilty of hiring gunmen for 3 million baht to kill Prayoon.

The Criminal Court ordered Somchai to serve the jail term, after completing a five-year-and-four-month sentence handed down to him in another ruling for corruption in the purchase of public land in Tambon Khao Mai Kaew to build a garbage landfill.

The pair appealed for the case to be dismissed, claiming they were innocent and had no previous dispute with Prayoon. The Appeal Court on October 12, 2006 upheld the Criminal Court verdict, prompting the pair to appeal to the Supreme Court.

Somchai was also sentenced in 2006 by the provincial court and Appeals Court to five years and four months in prison for corruption involving the sale of a site in a forest reserve in Tambon Khao Mai Kaew, Chon Buri, in 1992 for use as a garbage dump.

In that case, Somchai also failed to show up to hear the Supreme Court’s verdict, due to be read on April 7, 2006.