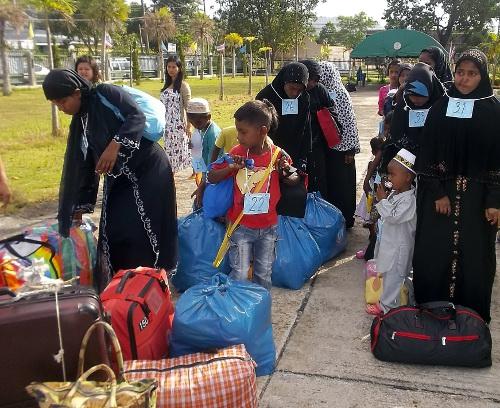 PHUKET: Overcrowding at the Phang Nga Shelter for Children and Family, which was housing more than 100 Rohingya refugees, has forced the shelter’s director to have more than 50 of them transferred to a welfare center in Surat Thani.

A bus with 13 Rohingya women, 19 boys and 20 girls is now en route to the Baan Srisurat shelter (website here), the director of the Phang Nga shelter told the Phuket Gazette this morning.

The Phang Nga shelter initially planned to transfer 55 refugees, but a misunderstanding over how this specific number would break refugee families apart forced a compromise, and 52 volunteers were sent to Baan Surat, Phang Nga shelter Director Dararat Sutheth said explained.

“We had a tough night last night. Police officers had to be called in. Once the refugees saw the officers in uniform, they calmed down. We settled the issue by agreeing to have only volunteers sent to Surat Thani. The 52 people departed at 9am today,” Ms Dararat, said.

“The shelter in Surat Thani is a refuge for human-trafficking victims. It is the shelter’s policy to accept only women and girls, as well as boys not over 10 years old,” Ms Dararat explained.

Despite the transfer this morning, the Phang Nga shelter remains heavily overcrowded, with 54 refugees still staying at the center (story here).

“Our shelter can comfortably accommodate only about 20 people… We have one big room, as well as three small rooms. The big room can comfortably fit only about 13 people, so the rest have to sleep on the floor in the corridors; on the stairs; and even in front of the toilet,” Ms Dararat said.

“I have heard that more are coming, but I have yet to be told how many. This is why we had to move some of the refugees to another shelter,” she explained.

The overcrowding has raised health concerns, despite a medical team attending to the refugees by treating a range of afflictions brought on by weeks at sea in open boats.

“Many of them are suffering skin diseases, and have serious stomach issues and diarrhea, as well as vomiting, due to the fact that they had been drinking the sea water,” Ms Dararat said.

“So far, no contagious diseases have been found here at the shelter. Yesterday, we had a medical team check the 106 refugees and conduct blood tests for malaria. Anyone found to have malaria, including those sent to Surat Thani, will receive medical treatment,” Ms Dararat confirmed.

The donations of clothing and daily necessities that have been flooding in are greatly appreciated, she added.

For details of how to donate items to go to the welfare of Rohingya refugees, click here.