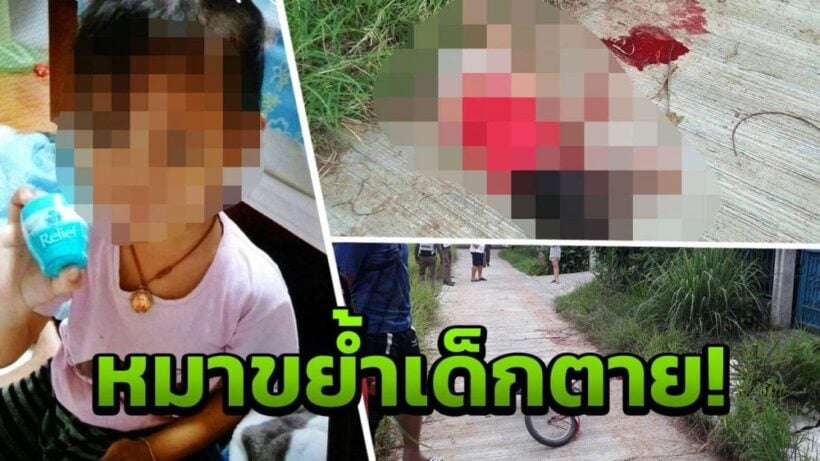 A four year old girl playing outside her house on a bicycle has been savagely mauled to death by three dogs that got out of a neighbour’s yard. The incident happened in Chaiyaphum province.

But the dog owner could face only a small fine or a short jail term.

Thai Rath report that when Chaiyaphum police arrived at the ski they found a lot of blood on the walkway and in the grass.

Little Thanyaluk Salitakun’s pink bicycle was lying on the ground. The four year old died on the way to hospital from injuries and massive blood loss.

The next door neighbour, 57 year old Noppapon Kunthanawat, says he was watching TV in his house on Tuesday afternoon when he heard the girl’s screams.

He rushed out and saw the dogs savaging the girls neck and head. He managed to beat the dogs off and they ran into nearby houses.

By this time Thanyaluk was bleeding profusely and lying still in the grass. She was rushed to hospital but it was too late.

Noppapon said that the dogs responsible for the attack were kept in pens in a neighbor’s house. They were a pregnant Thai dog breed, a male Thai dog breed and a poodle. (We haven’t been able to precisely identify the ‘Thai dog breed’)

The dogs were aged about 2-3 years.

The girl’s grandmother says that she was looking after her two grandchildren and was preparing food at the time. Their mother, a teacher, hadn’t returned from work.

She said that the owner of the dogs was a good neighbour but he had yet to take responsibility for what happened. She wanted the incident to be a warning to dog owners to always keep their pets inside the house.

The dog’s owner, 27 year old Piyanat Daengsoi, has initially been charged with an offence related to allowing fierce animals out in the street where they could do harm. For this he could face a maximum of one month in jail or a 10,000 baht fine.

Police say that, if negligence could be proven, he could be in more serious trouble. The owner and the little girl’s relatives will be re-interviewed following her cremation.

MP numbers being shuffled around in lead up to Thai election