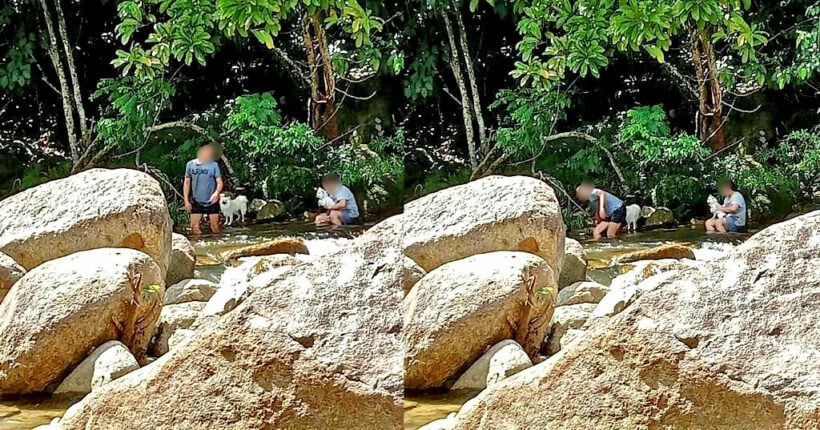 The Department of National Parks, Wildlife and Plant Conservation has prosecuted dog owners who brought dogs and bathed them at a waterfall inside the Khao Luang National Park in the southern province of Nakhon Si Thammarat. The authorities said pets were banned from entering the national parks in Thailand to prevent the spread of diseases from the urban area.

One social media account posted pictures of a man and a woman enjoying a waterfall with their two dogs on a Facebook group.

“I know you love dogs, but you should think about others. At Phrom Lok Waterfall, dogs enjoyed the upper waterfall while the rest of the tourists were swimming at the lower waterfall.”

The post went viral and many Thai netizens shared their opinions, saying many humans also make the waterfall dirty.

“Did you know someone peeing in the water too?”

“Stay home if you are worried.”

Even though many Thais thought it was acceptable to share the waterfall with pets, the Department of National Parks, Wildlife and Plant Conservation had to prosecute the dog owners for violating the park’s rules. The authority clarified with Thai media that pets were banned from entering the national parks because of the risk of spreading some diseases to indigenous animal.

The authority didn’t announce the exact prosecution or penalties that the dog owners would face. According to Thai media, dog owners might face a fine of up to 100,000 baht for breaking the orders of the national park authorities and bringing pets to the national park without permission.

RichardR
It is cheaper to kill an eyedoctor
Grant
Deer and wild animals upstream bathing in waterfalls and rivers are owned by the Government! prosecute them now! Prosecute the Government allowing villagers allowing sewerage into the rivers and pesticides! prosecute fishing community for allowing Mud cleaning of Mussels and…
Grant
Endangering Human health? How about doing something about speeding drivers in car parks and on the roads endangering lives and actually killing people! 2 Dogs going for a swim ?🤔🤪 Really??

Pinetree
That is just plain dumb. These people are as thick as a brick.