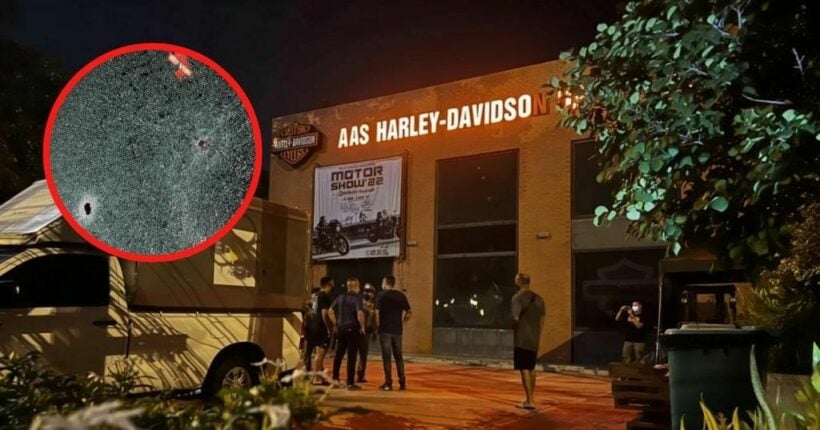 Following a report on the shooting at a Harley-Davidson motorcycle shop in Pattaya, police expected that influential Thai residents and foreigners were involved. The officers say the group might have had some sort of conflict over the business and personal issues between members of two influential groups.

The Harley-Davidson motorcycle shop located on Sukhumvit Road in Pattaya was the location of the attack. 11 gunshots were spotted on the front window. The shop’s security guard told police that 4 suspects arrived at the shop on 2 motorcycles and seized his phone to prevent him from calling the police.

Then, the shooters immediately fired at the showroom and fled away. Then police received another report of a shooting at the house of a HOG AAS of Pattaya (motorcycle club) member. The shooting happened at a similar time, and the officers believe the 2 shootings are connected.

The investigation and search for the suspects continues. On April 25, the Deputy Commissioner of Nong Prue Police Station, Suchart Theerasawat, revealed that the investigators revisited both crime scenes to collect more evidence. They have been checking the CCTV cameras at the time of the incidents, as well as the days before, to identify people who might be involved. The Deputy Commissioner says the police already have some “interesting names” but didn’t reveal them to the media.

Police are now coordinating with tourist police and Interpol to investigate the case and see if there’s any links to transnational crime.

Noble_Design
Is the Pattaya chapter of Hell's Angels possibly involved?
Graham
Some interesting names ? Maybe the BIB are waiting for the delivery of brown envelopes before divulging any more information. 555

palooka
Thailand doesn't need this sort of crap. Get rid of them all.
Vigo
It has always puzzled me that these foreign MC thugs could so easily enter Thailand and stay for so long. You don't get the run of the house without official protection.