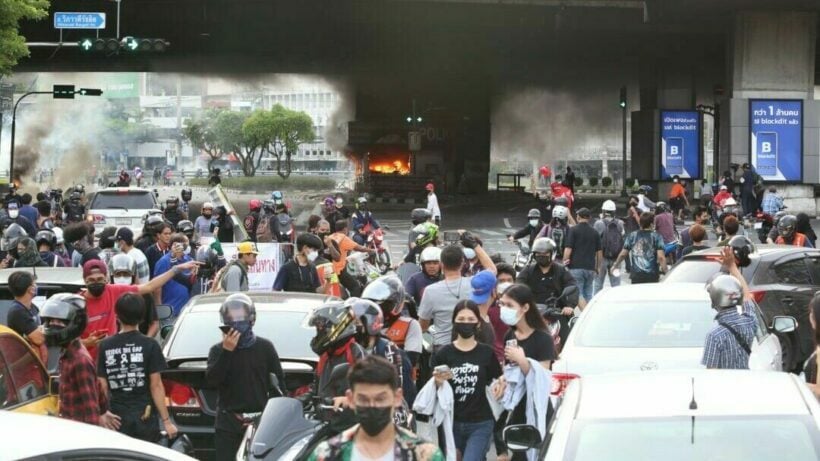 Bangkok police continue to wield the merciless hammer of law and order. They brought it down last night on a 12 year old, arresting the child for allegedly violating curfew at the Din Daeng intersection. The minor was riding his bike to observe a protest, says a group of lawyers and activists. At least 11 other people were also arrested.

The 12 year old is now the youngest person to be charged with violating the curfew. The Thai Lawyers for Human rights say the move, invoking the curfew to make an arrest, is a common pandemic tactic used against protesters. Other people that were arrested include 2 journalists, Natthapong Malee from Ratsadon News, and an unknown woman from the Free Our Friends social media page. A volunteer medic was also arrested, says the lawyers’ group. All the suspects were taken to the Phahon Yothin Police Station and were charged with violating the curfew, which is in place from 9pm to 4am.

Dozens of protesters have been arrested around the Din Daeng intersection over the last couple of months. There have been several violent confrontations with the police. One teenage protester was shot in the shoulder and his father later filed an official police complaint. Earlier today, the Thaiger wrote how a police officer allegedly hit a protester with his truck, but the Metropolitan Police Bureau denied that it was a hit and run. Yesterday, police said the Din Daeng protests will be over by next month.

Stardust
6 minutes ago, Fluke said: If the best that Democracy can do is to install leaders like Biden , it may be worth giving the Chinese idea a go  Sure and kill millions and bring into concentration camps like Mao,…