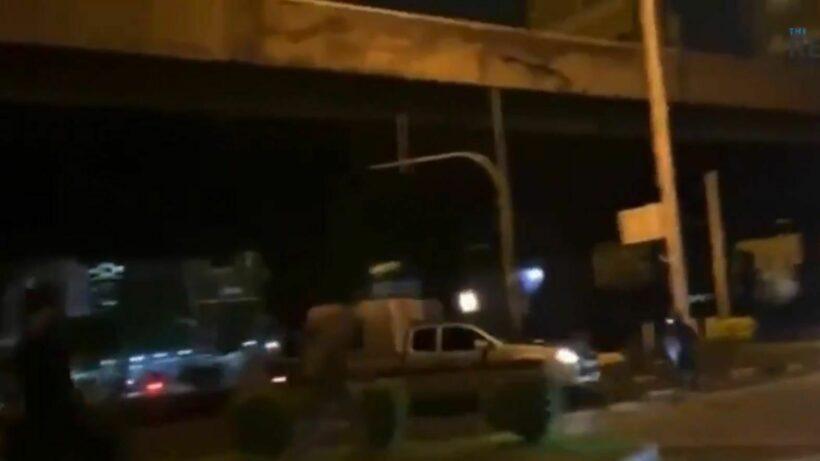 The Metropolitan Police Bureau is claiming that the officer who allegedly plowed his truck through a group of pro-democracy protesters over the weekend did not commit a hit and run. 1 protester was injured as a result of the incident.

Pol Lt Gen Phukphong Phongpetra concedes that a prisoner transport vehicle was involved in the incident but claims that it was not a case of hit and run as pro-democracy protesters would have you believe online. Phukphong says the truck was attacked by protesters as it drove past the Din Daeng intersection on Sunday. A location that is notable for the presence of the protest group “mob Thalugas”, or “mob that goes through tear gas”, who have had aggressive encounters with police in the past.

Bangkok Post says that as the truck got to Din Daeng, it was attacked by 6 to 7 protesters. They claim the driver, identified only as Sergeant Noraset, attempted to zigzag the vehicle out of the way of the group, but one protester jumped in front of the truck and was clipped in the process. Phukphong’s comments follow a video posted online that showed a protester being hit by a police truck. The protester who was hit is said to be a 14 year old boy and was taken to the Rajavithi Hospital. According to Thai PBS, Noraset claims the injured protester managed to get up and run off after being hit by the vehicle, so Norsaet also left the scene.

The police chief says that Noraset didn’t stop his vehicle because he was concerned for his personal safety. It was not clear if the chief meant this is why Noraset didn’t stop before hitting the protester, or why he didn’t stop after hitting him. Further complicating matters, Thai PBS says Phukphong claims the driver didn’t intentionally drive into the protesters, thus, the incident can’t be considered a hit and run because it wasn’t done on purpose.

Phukphong went on to say that after hitting the protester with his vehicle, the driver reported the incident to his supervisor, lodged a complaint with the Din Daeng police against the attackers and then asked forensic officers to inspect the vehicle.

A source from the police says a fact-finding probe is underway and that legal action will be pursued against the driver… if a complaint is lodged against him. The vehicle had sustained damage as a result of dealing with protesters and had to be abandoned at the Phramongkutklao Hospital. The injured protester’s health status was not remarked upon further.

A video of the incident can be seen here.

kerryd
It is clear that the vehicle was "at speed" and driving straight when the pedestrian/protestor ran out into the traffic lane and then ran directly in front of the truck. WTF was he thinking ? That the truck would be…