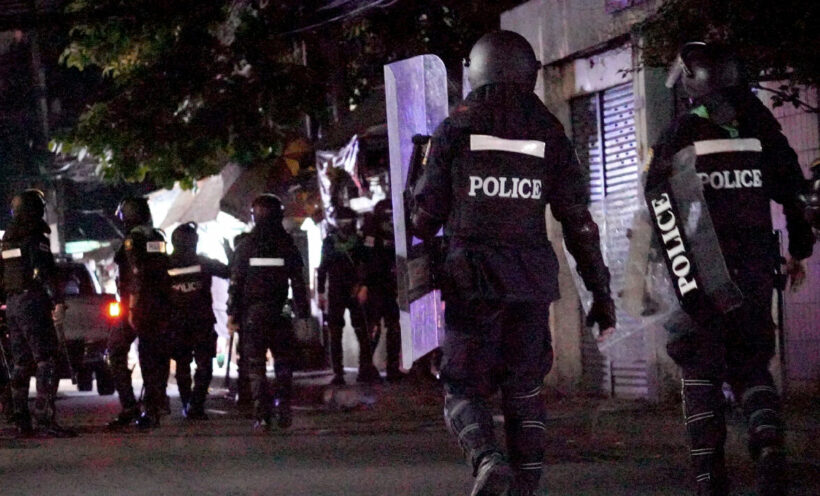 Last night, protesters and crowd control police met at Din Daeng in a heated confrontation that resulted in 78 people being arrested including bystanders, volunteer medics, and even underage people. Those who were taken into custody were held in several different police facilities, and the Thai Lawyers for Human Rights observed and reported on the arrests.

They said 20 people taken into custody were not protesting but were food vendors and taxi drivers on-site, and that another 9 of the 78 people arrested were minors. The nearly daily protests at Din Daeng demanding the resignation of PM Prayut Chan-o-cha resulted in at least 225 arrests in August with 62 of them being between 15 and 18 years old, and 15 under the age of 15.

Crowd control officers also took 25 volunteer medics into custody last night and transferred them from the Royal Thai Army Band Department headquarters to Din Daeng Police Station before finally releasing them this afternoon without any charges. Police denied those held access to a lawyer saying they weren’t being charged with anything so they didn’t need one. The medics were told to register with Metropolitan Police and observe curfew in the future.

The police also denied lawyers access to the police station which was set up like a war zone with armed guards in bulletproof vests, surrounded with razor wire, and the lights inside turned off.

During the evening’s protest, police fired tear gas and rubber bullets at the protesters who in turn threw small explosives and firecrackers back. The tear gas was ramped up 15 minutes before the 9 pm curfew trying to disperse protesters and it was reported that tear gas was also fired into nearby homes causing angry residents to come out of their homes where they were threatened with arrest for breaking curfew.

iLaw and Voice TV reported that police surrounded an apartment building and searched for protesters inside while pelting the building with marbles rubber bullets and tear gas to flush out the protesters. The building suffered significant damage and residents inside had to leave their homes and seek sanctuary elsewhere.

Stardust
Curfew for medics?!. Medics are excluded from the curfew! The responsible Police should learn first the rules and laws. But we could see again with Jo Ferrari what the Police thinks about laws and rules, they are thinking laws are… PompeyLlama
I have no vote so I have no say about government or protests. I was not there so can't say one way or another.  What I can say about is that because of the problems the bus driver often stops…

palooka
10 minutes ago, PompeyLlama said: I have no vote so I have no say about government or protests. I was not there so can't say one way or another.  What I can say about is that because of the problems…

PompeyLlama
12 hours ago, palooka said: It is well known that there are protests in this area regularly, they do inconvenience some, SMART CLEVER people plan and avoid the area completely and their lives are NOT disrupted greatly.  In the past…
Stardust
And a hit and run by police. The victim was 14 years old   Erich Parpart (@erich_parpart) Tweeted: A police detention truck committed a hit and run at Din Daeng last night. The police said it was an accident.  #ม็อบ12กันยา…