Thailand’s Centre for Covid-19 Situation Administration approved the new cutoff hour, as well as a revision to the zoning, reclassifying 25 provinces as “yellow,” at its general meeting today chaired by PM Prayut Chan-o-cha.

The CCSA had changed the cutoff time to 9pm earlier this month due to the uptick in Covid-19 cases following the New Year holiday and the emergence of the Omicron variant in Thailand. While infection rates rose, a spokesperson at the CCSA briefing says cases have been less severe and fatalities have remained low in comparison to previous outbreaks.

Earlier this month, the CCSA agreed to allow bars, nightclubs, and other entertainment venues, which have been closed since April, to reopen temporarily as restaurants. The CCSA says restaurants serving alcohol must abide by standards set by the Safety and Health Administration and Thai Stop Covid Plus programme as well as the government’s Covid Free Setting measures. 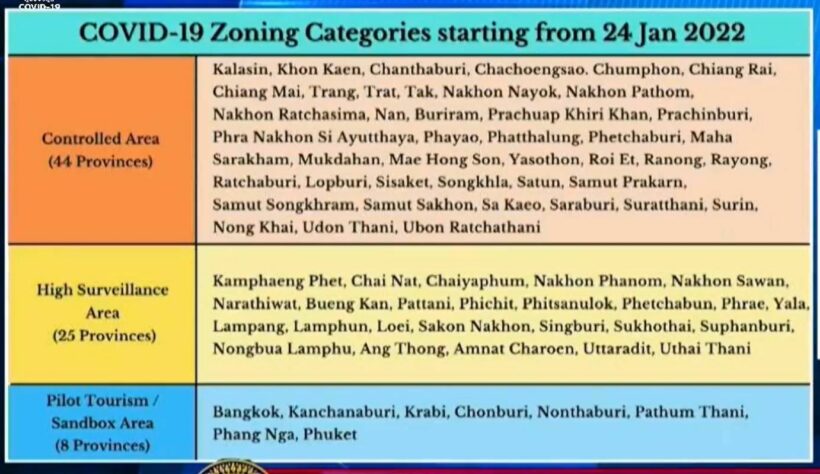 AMc
7 hours ago, AlexPTY said: Omg, I guess pandemic is over https://www.voanews.com/a/britain-to-drop-covid-19-restrictions-/6403604.html getting there, I pray. Perhaps, now that the cat is almost out of the bag, this is what they fear

AMc
7 hours ago, TheDirtyDurian said: Terrible idea. They should be banning alcohol sales completely, or if not completely, ban all foreigners consuming alcohol. That's the only way to stop this deadly virus.

Vince
12 hours ago, TheDirtyDurian said: Terrible idea. They should be banning alcohol sales completely, or if not completely, ban all foreigners consuming alcohol. That's the only way to stop this deadly virus. Absolutely correct. Studies show only foreigners spread COVID-19…
samiam123
14 hours ago, huhuarf said: No but people are tired of being told to cower in the corner after two years of lockdown and a year of vaccine drives. Sounds like half the places are ignoring the rules anyways.

Vince
6 minutes ago, samiam123 said: Sounds like half the places are ignoring the rules anyways. Ssh!!! I've heard there is 100% compliance.