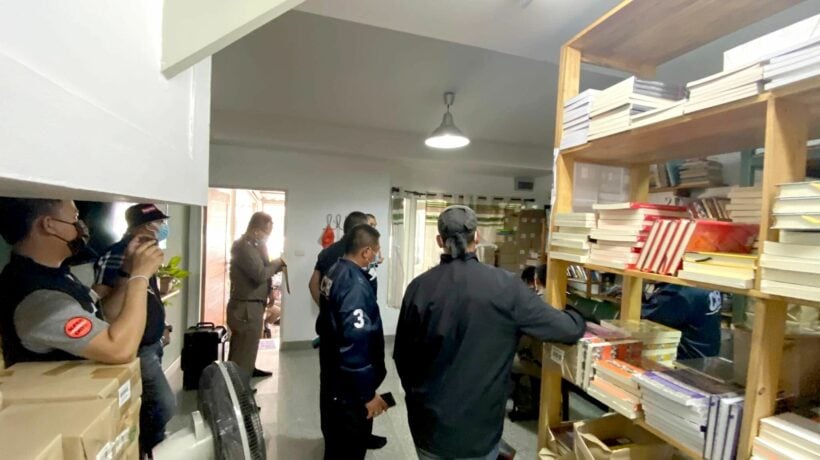 Just in time for the National Book Fair coming to Bangkok, police this morning rated a Bangkok book publisher known for issuing material against the grain of normal Thai society. Fa Diew Kan, which translates to “Same Sky”, was raided at about 10:30 this morning by around 30 police officers.

The officers came with a warrant to look for books “about the monarchy and Thai society” and proceeded to search the book publishers offices in the Rattanthibet area of the Greater Bangkok suburb province of Nonthaburi. In a statement released by the publishers, they said that the computer and mobile phone of the editor and co-founder have been confiscated along with other electronic equipment.

The book publishers have gained popularity publishing journals that include commentary, analysis, and deep discussion about Thai life, including politics, without shying away from the subject of the monarchy or censoring critical opinions.

One of their previous publications, The Monarchy and Thai Society by Arnon Nampa, a lawyer and activist but been jailed for protesting the government, earned the book publishers another police raid last March where the authority seized copies of the book and vowed to search them thoroughly for anti-monarchy content.

Fa Diew Kan has a long history of butting heads with authorities though, with those two raids being only the latest in a string of clashes dating back to the early days of the military coup that took power in 2014 and still holds it today. The co-founder was hauled in for questioning repeatedly and even detained several times shortly after the coup when the military junta attempted to prosecute anyone who criticized them.

The book publishers also face legal battles last year over two books that they had produced where the company was accused of disseminating false information and slander. The books were based on a doctoral thesis regarding cold war-era politics by known academic Nattapol Chaiching.

Pompies
Freedom of the mind does not suit this so called government and it is learning just how to control thinking and actions by observing how Winnie the Pooh, or should I say Xi Jinping, is demolishing freedom in Hong Kong…

Poolie
2 minutes ago, Pompies said: Freedom of the mind does not suit this so called government and it is learning just how to control thinking and actions by observing how Winnie the Pooh, or should I say Xi Jinping, is…