Today, Thailand has reported 201 new Covid-19 cases, with 185 being locally-transmitted.  16 of those cases were imported, raising the total number of cases in the country to 24,104 since the outbreak began.

An assistant spokeswoman for the Centre for Covid-19 Situation Administration, says 96 new cases were confirmed at hospitals and 89 others through active case finding.

Samut Sakhon, the epicentre of the 2nd wave of Covid in Thailand, recorded the most cases at 129. 73 of those cases were found in communities (62 Myanmar and 11 Thais) and 56 at hospitals (30 Thais and 26 Myanmar).

Bangkok recorded 17 new cases with 14 being linked to the cluster at Chulalongkorn University. Tak province reported 37 new cases with 23 being confirmed at hospitals (22 Myanmar and 1 Thai) and 14 other cases in communities, all working Myanmar nationals.

The 16 imported cases were quarantined arrivals from Pakistan, Sudan, Japan, the United States, Russia, Turkey, Sweden and the United Kingdom. 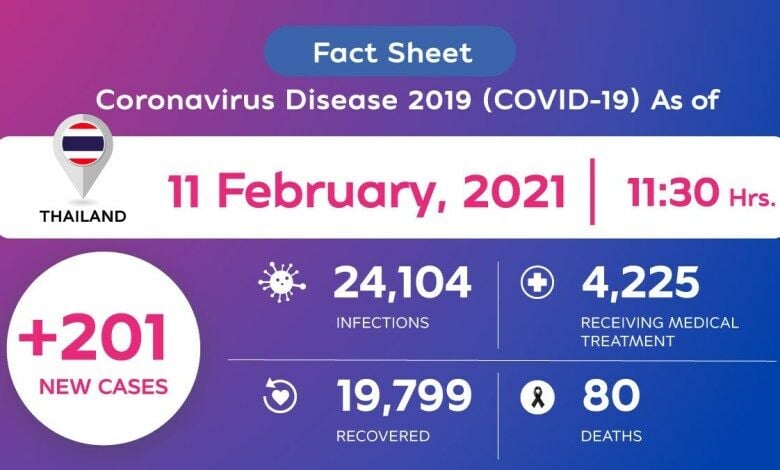 Thailand’s Health Minister, Anutin Charnvirakul, says the first stage of human trials of a locally-produced vaccine will get underway next month. The jab is a joint collaboration between the Government Pharmaceutical Organisation and the Faculty of Tropical Medicine of Mahidol University. It’s understood the vaccine has performed satisfactorily in animal testing, showing an ability to stimulate immunity.

According to a Thai PBS World report, Kiatipoom Wongrachit from the Public Health Ministry, says the GPO is very experienced in the production of flu vaccines and is collaborating with Mahidol University’s Faculty of Tropical Medicine, with support from the US-based Program for Appropriate Technology in Health.

The leaders in the race to develop a Covid-19 vaccine