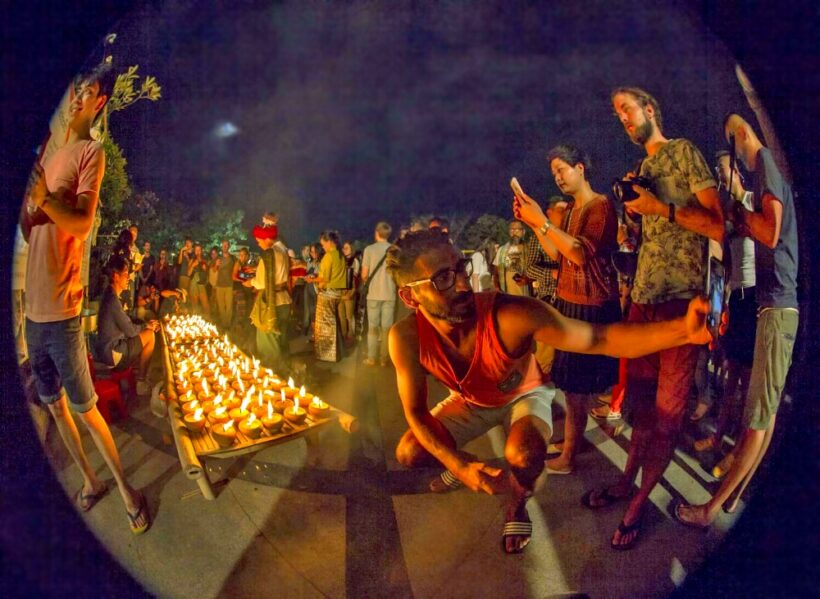 Around the country, provinces attracted crowds watching parades of giant floats representing government and private agencies, beauty pageant contests, and stage performances, while many sent off krathong floats onto rivers, lakes and ponds as an apologetic gesture to the Goddess of River.

In Phuket all the major waterways had a big turnout with the predicted bad weather holding off. The light winds were enough, however, to blow out candles on krathongs as they were launched on the island’s waterways.

At the Thetsaban Tambon Kathu Park Lake huge crowds launched their krathongs in the lake and enjoyed the music and markets set up from early evening until after midnight.

In Patong, Patong Mayor Chalerm Lumkaset said that the Loy Krathong festival is a tradition of the Thai people inherited from the Kingdom’s former capital, Sukhothai. She said that the annual festival is a one of the traditions that expresses the uniqueness of Thai nationality.

Siphon Hin, Nai Harn Lake, the lake at the foreshore in Laguna and Kathu’s Bang Wad dam were also some of the popular launching spots for families with plenty of tourists and expats getting into the Loy Krathong spirit of ‘floating away the bad luck from the past 12 months’. 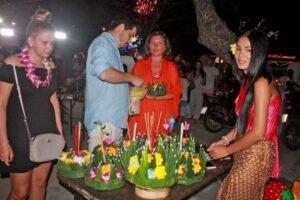 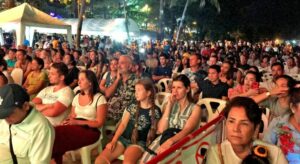 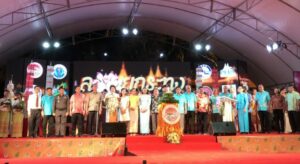 At the Prince of Songkhla University in Phuket 120 student got together to make their own krathongs and then launch them. Thai and international students participated in the krattong making at the campus in Kathu.

How to make a krathong. Live from PSU.

Panurat also led officers to ensure that safety measures were in place at “Asiatique The Riverfront”, which expected the city’s largest festival turnout of about 30,000 people, followed by Chulalongkorn Pier with about 5,000 revellers and the area under the Rama 8 Bridge with another 4,000 revellers.

Panurat instructed officers at all Bangkok precincts to watch out for youth street racers who might create disturbances during the festival, especially at known locations, including Kaset Nawamin, Bang Na-Trat, Chaeng Wattana, Kanchanapisek, and Rama IV roads.

Meanwhile, Minister of Natural Resources and Environment, General Surasak Karnjanarat, has urged all ministerial agencies to encourage people to use more environmentally-friendly materials for their floats in the festival. He also urged people to use smaller floats and to share floats to reduce the amount of garbage that city workers have to dispose of the next day.

After authorities campaigned for more natural or environmentally-friendly materials, the number made of polystyrene dropped gradually until 2016. A follow-up report showed that of 661,935 floats collected after the festival in Bangkok, 617,901 (93.7 per cent) were made of banana stalks/leaves or other natural materials and only 44,034 (6.7 per cent) from polystyrene Down South, Songkhla’s Hat Yai district was buzzing with a large number of Malaysian and Singaporean tourists enjoying the celebrations. Festivities were held at two main venues – a celebration in nostalgic flare featuring food from four regions at the Bang Hak Pier Near Khlong U-tapao, and a celebration under a “Thai Temple Fair” theme at the Nakhon Hat Yai Municiplaity Park. 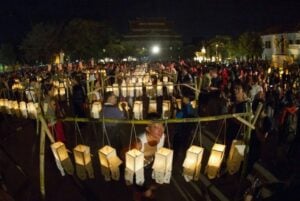 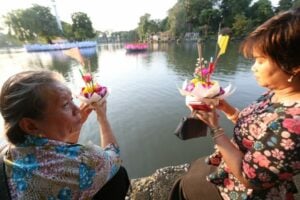 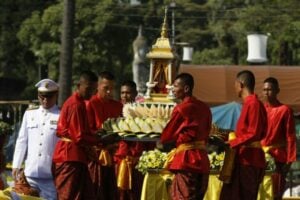 Up North, Chiang Mai City municipal mayor Thatsanai Boorabupakorn led officials to attend a rite yesterday morning to give various offerings to supernatural beings ahead of the grand celebration later at night. Chaing Mai people – as well as those in the upper North – call the festival “Yee Peng” (full moon of Lanna lunar calendar’s second month), and decorate houses and temples with beautifully illuminated lanterns and light small baked-clay candles to worship the “Three Gems” of Buddhism.

People also launched floating lanterns into the night sky to get rid of misfortune – the activity that earlier prompted Chiang Mai Airport to reschedule and cancel some flights between yesterday and today as a safety measure. A large number of lanterns in the sky could be a danger to aviation. Chiang Mai authorities’ have announced that fire lanterns can only be released during Yi Peng and Loy Krathong festivals between 7pm and 1am.