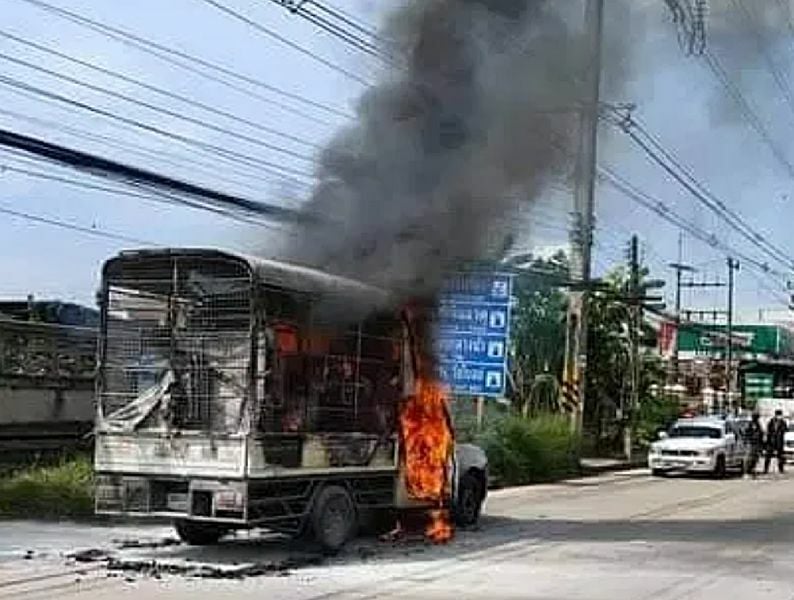 PHOTO: A truck burst into flames, but the passengers escaped safely. (via Khaodenpradendang)

A pickup truck erupted into a flaming inferno with the occupants narrowly escaping the fire in Phanat Nikhom district of Chon Buri. The driver and passenger managed to climb out of the burning truck and run to safety. Local police received notification of the incident which happened on Suk Prayoon Road in the Kut Ngao subdistrict on Wednesday.

By the time that Phanat Nikhom Fire Department firefighters reach the burning truck, the two passengers had escaped without injury and were waiting on the side of the road watching their pickup truck go up in flames. The fire was severe, and it took the firefighters about 30 minutes to contain and completely extinguish the flames.

The driver, a 28-year old man from Buriram, said he was on a routine delivery trip from Nakhon Pathom to the Bor Thong district when his truck inexplicably burst into flames. The fire occurred in a similar fashion to a bus that burned last month, taking the lives of 5 passengers, that was later determined to be caused by problems with the brake system.

The vehicle was towed to a local mechanic and firefighters are investigating to try to determine the cause of the fire that totalled the pickup truck. The driver said that he knew of no mechanical or electrical problem and that the truck was running fine previous to the fire.

He and his passenger saw smoke and flames in his rearview mirror and thought that a nearby car had caught fire on the road. They didn’t realise at first that it was their own truck burning. When they did, they stopped the car immediately, jumped out and ran, calling for emergency assistance. They didn’t even have time to pull over and fled the truck as it sat in the middle of the road.

Koh Larn extends closure to end of May