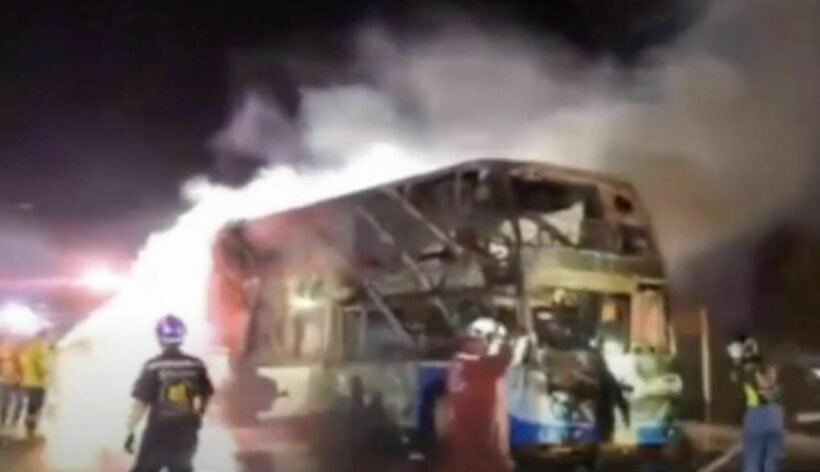 Checking your brakes regularly is something that could save you from a fatal accident, yet a lack of routine maintenance seems popular when it comes to accidents. The latest victims from a brake system failure, include 5 fatalities and 12 injuries after a bus in northeastern Thailand’s Khon Kaen province crashed.

The horrible accident happened last Tuesday at about 12:30am on Mitraphap Highway near Nong Kham in tambon Non Sombun. A double-decker bus headed towards Bangkok, erupted in flames with survivors saying a back tyre burst and caught fire. The, the fire spread to the engine area which then saw the bus burst into flames.

A Department of Land Transport accident investigation report says the brake system failed, overheated and caused the tyre to explode. Hot rubber pieces then landed on the valve of an NGV cylinder causing a gas leak.

The bus’ driver, 48 year old Patsadee Kham-on, is being charged with reckless driving causing death and injuries, for assumingly not checking the vehicle’s brakes before setting off. The Khon Kaen governor says the provincial land transport office has also fined the bus owner, 407 Pattana Tou Co, for using a sub-standard bus.

In November of last year, a cement truck driver in Banglamung, blamed faulty brakes for not being able to stop the truck, resulting in it running off the road and flipping. The 61 year old driver, luckily, made it out with only minor injuries. Sadly, this type of accident is quite common and likely will grace the news again, if routine maintenance is ignored.

According to directasia.co.th website, “Checking your brakes at least every year will give you advanced warning on brake pad breakdown. Putting off the less costly pad change can lead to much more expensive brake rotor repairs and even failure when driving. A major component in the Thai driving test is gauging how quickly you can slam on your brakes….for good reason.”

Thailand conducts routine checks on public transportation vehicles, with the news usually not being up to par with what one would expect when paying to be transported. The Department of Land Transport just 2 years ago, in one of its annual checks, revealed 1 in 7 public transport vehicles failed the inspection checks.