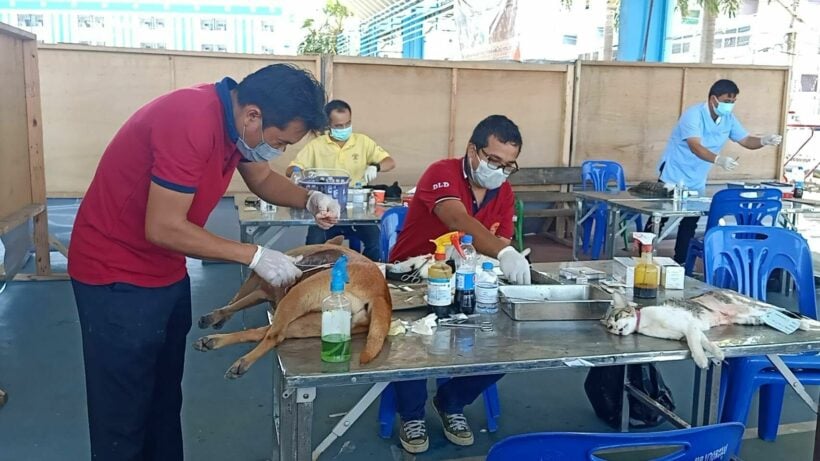 Officials in Chon Buri’s Bang Lamung municipality are having animals spayed in order to lower the number of strays in the area. Yesterday, vetrinarians from the municipality’s livestock development department spayed animals at a temple. The Bang Lamung district chief said the goal of the campaign is to stop both stray animals, and pets, from reproducing.

The chief added that sterilising animals also makes them healthier, and lowers their risk of cancer. He stressed that all sectors in Bang Lamung needed to cooperate on the solution to stray animals, since they are a burden to locals.

Thailand struggles to deal with its high number of stray dogs and cats. In 2017, it was estimated that there were 860,000. stray dogs and cats in the country. That’s more than double the 350,000 in a decade earlier in 2007. Somchuan Ratanamungklanon, the deputy director-general of Thailand’s Department of Livestock Development predicted that in 2027, Thailand would have “as many as 2 million stray dogs and cats in 2027 and 5 million in 2037”.

Last month in Sri Racha, another district of Chon Buri, firefighters rescued a 3 month old kitten from a roadside gutter it had fallen into. After the story was posted on social media, people praised the firefighters for the rescue, and the kitten was adopted.

One Chon Buri foundation, The Man That Rescues Dogs, helps to rehabilitate sick and injured stray dogs. A Swedish man founded the foundation in 2011, when he would take sick and injured animals to a local veterinary clinic for treatment. The foundation opened a clinic of its own in 2019 and now has 2 veterinarians caring for dogs that live at the sanctuary, as well as providing free treatment to local pets.

Fanta
44 minutes ago, Ramanathan.P said: Good initiative. They should extend this to the monkey gang in Lop Buri also... Good idea although it might cause a shortage of future politicians. Correction: Excellent idea.

Poolie
1 hour ago, Fanta said: Good idea although it might cause a shortage of future politicians. Correction: Excellent idea. Wait.....what about board members? Perhaps all is not lost after all! 😃
Ramanathan.P
1 hour ago, Pinetree said: around my house in Sattahip too, they are a real menace, much worse than the soi dogs. You could try keeping "Belacan" in small containers hanging around for the monkeys to taste. Once they taste…

palooka
12 minutes ago, Ramanathan.P said: You could try keeping "Belacan" in small containers hanging around for the monkeys to taste. Once they taste it, they will not come to that area as they don't like that smell. Well, this was…