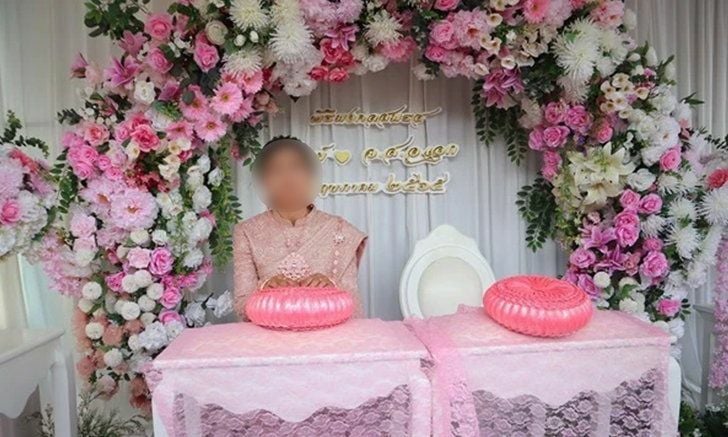 A Thai bride welcomed all her guests to her wedding on May 1 in Prachinburi province, eastern Thailand, but the groom never turned up. The man claimed to be a soldier, but when he didn’t attend his own wedding, the bride asked the Royal Thai Army to locate him. When the army checked their database, they didn’t find any army personnel under his name. The bride expects he couldn’t afford to pay the dowry requested from her parents.

The bride, a 40 year old factory worker named Namthip, spent ฿300,000 on the wedding in Kabin Buri district. She said she borrowed the money from her family, spent it all on wedding arrangements, and now she needs to pay it back all on her own.

Namthip arranged various Chinese ceremonies and traditions and prepared 50 tables of food and drinks for her wedding guests. She stood and welcomed all the guests, but as the time passed, the groom didn’t turn up to the event. When she tried to contact him, he didn’t pick up. She said that after a while, she realised that he had deceived her.

The man told her his name was Suwannahong, or Ek, and that he was a soldier with the rank of Sergeant Major.

Yesterday, Deputy Spokesman of the Royal Thai Army Cl. Sirichan Ngathong said he checked the army’s database but found no army personnel under his name.

“Me and my boyfriend, who claimed to be a Sergeant Major, have been in a relationship since December last year. He also claimed to be a bodyguard for local politicians in Nadi subdistrict. His personality, clothes and speech made me believe he was a real soldier and bodyguard. Therefore, I felt no need to confirm his identity with the army while we were together. He was a good natured man, consistently got along well with my family, and took care of everything in the house.”

Namthip’s parents requested a dowry of ฿200,000 and 3 baht of gold from Ek. Around 7am on the day of the wedding, Ek rang Namthip and argued about the dowry money. After that, the bride couldn’t contact him anymore.

She said that throughout their relationship, she attempted to contact and visit Ek’s relatives in Nakhon Ratchasima province, but Ek would always find an excuse why she couldn’t visit. She said she never once spoke to any of Ek’s relatives.

Wozzlegummich
Sad for her - talk about "losing face" bigtime! But isn't dowry/sin-sod just another form of people trafficking or slave trading even if it is "tradition".
AndynPhuong
On 5/8/2022 at 4:48 PM, JamesR said: I have never understood why any guy would find her attractive as she looks like an oversized ladyboy but I suppose to an American she is seen as a beauty. when I…

One Chon Buri municipality is neutering animals to have fewer strays