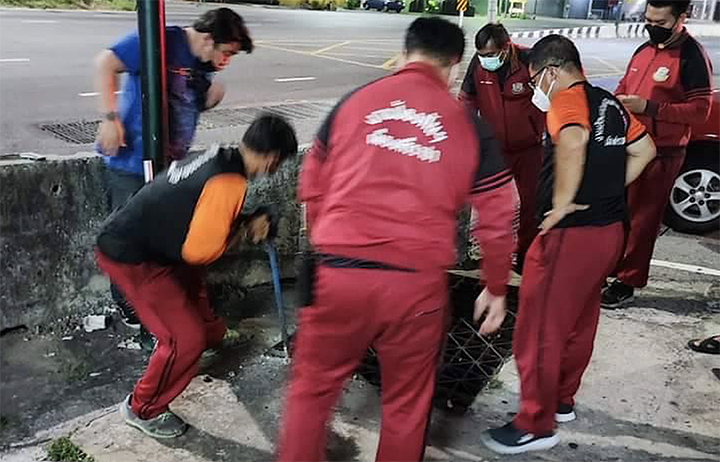 On Friday, firefighters in Sri Racha district of Chon Buri province rescued a 3 month old kitten from a roadside gutter it had fallen into. A woman told The Pattaya News that she heard the cat crying from somewhere and discovered that the kitten was stuck in a gutter, so she called 199 for help.

The firefighters said the gutter was sealed with a heavy metal lid, so they had to wedge it open with a crowbar. Though the rescue was tiresome and took 2 hours, the firefighters eventually succeeded, getting the tiny kitten out of the gutter to safety. After the story was posted on social media, people praised the firefighters for the rescue, and the kitten has now been adopted.

The kitten, a male, was trapped in a gutter near Surasak Road.

Thailand struggles to deal with its high number of stray dogs and cats. In 2017, it was estimated that there were 860,000. stray dogs and cats in the country. That’s more than double the 350,000 in a decade earlier in 2007. Somchuan Ratanamungklanon, the deputy director-general of Thailand’s Department of Livestock Development predicted that in 2027, Thailand would have “as many as 2 million stray dogs and cats in 2027 and 5 million in 2037”.

Animal welfare foundations, most notably Soi Dog Foundation, have fought to tackle Thailand’s problem with stray cats and dogs. In November last year, the foundation sent over 100 tonnes of dog and cat food to animals affected by flooding in Nonthaburi and Sing Buri.

In January, an illegal shelter in Surat Thani was successfully shut down and 17 street dogs were rescued by Soi Dog Foundation after reports were received of dire conditions and severe neglect.

Ramanathan.P
42 minutes ago, Transam said: Putin, for instance......🤨 Why blame one sided....what about the Ukrainian pilots who were hired to drop bombs on innocent civilians in Sri Lanka during the genocide?......it is everywhere as people don't see the effect of…
DWiener
It must be amazing to be in Thailand right now, where so little is happening that a story of a kitten getting rescued is newsworthy.

Transam
1 hour ago, Ramanathan.P said: Why blame one sided....what about the Ukrainian pilots who were hired to drop bombs on innocent civilians in Sri Lanka during the genocide?......it is everywhere as people don't see the effect of their actions. It…

Transam
42 minutes ago, DWiener said: It must be amazing to be in Thailand right now, where so little is happening that a story of a kitten getting rescued is newsworthy. Great, isn't it.....😜
Ramanathan.P
6 hours ago, Transam said: Great, isn't it.....😜 May be the kitty might have been using GPS to go home but end up in the gutter.....