Thirty-five students from the Uttaradit Rajabhat University have been injured following a bus and car collision on the Rayong to Chaing Mai road last night (Thursday).

Four of the students and the unidentified car driver were seriously injured and the rest suffered minor injuries, including the 52 year old bus driver Wichien Phromtha.

Pol Lieutenant Apichat Chuathong of Huai Rai Police Station arrived at the scene at about 9.30pm – a U-turn on Denchai-Uttaradit Road in Ban Mae Puak (Moo 5), in the Den Chai district.

The bus driver claims that a Ford Fiesta sedan with a Phitsanulok licence plate was making a U-turn in front of him. He applied the brakes but was unable to avoid a collision and lost control of the bus.

Police say both drivers would be charged with reckless driving causing injury. 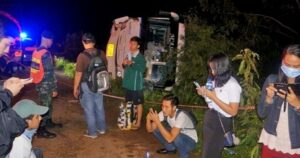 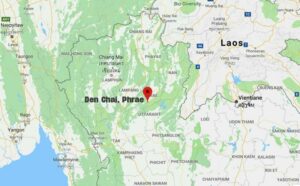