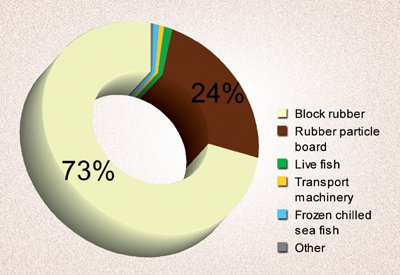 PHUKET: Trade flourished during 2011 in Phuket, with the island’s surplus of exports over imports more than 10.4 billion baht, according to statistics recently released by the Phuket Customs House.

The total value of imports to the island during the 2011 Thai Government fiscal year (October 2010 to September 2011) was 2.12bn baht compared to 12.5bn baht in exports during the same period.

Trade continued to flourish in the final three months of the calendar year, with an export-import surplus difference totaling more than 2.8bn baht.

Total value of the island’s imports from October to December, 2011 – the first three months of the 2012 Thai Government fiscal year – equated to 593.7 million baht, with the value of exports reported to be 3.43bn baht.

The bulk of these exports comprised of block rubber, totaling 73 % or about 2.5 bn baht of all exports, while 24 % or 808 mn baht was tied into rubber particle board.

As for highest value of imports from October through December, seafood tipped the scales with a total of 265.34mn baht’s worth brought to the island.

Yachts came in a close second during the same period, with the total value of imported luxury boats exceeding 236mn baht. Notably, 168.69mn baht of this value is attributed to 16 yachts imported during the month of December alone.