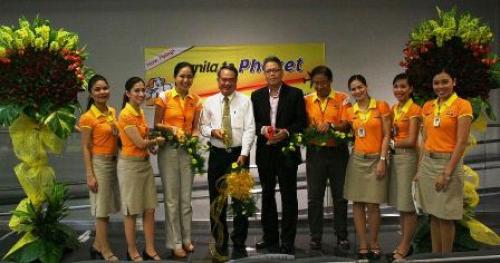 PHUKET: At about the same time that Tourism Malaysia announced the closing of its Phuket office (click here for story), another major Southeast Asian source-market is poised to link up with the “Pearl of the Andaman” – the Philippines.

As of this month and next, two regional airlines will service direct flights between Manilia and Phuket International Airport.

“We are proud to be the first airline to offer direct services between Manila and Phuket, so more travellers can visit Phuket’s world-famous beaches,” said CEB VP for Marketing and Distribution Candice Iyog in a press release. Phuket is CEB’s 21st international destination.

“Similarly, foreign tourists now have the option to add Manila to their itinerary, after they visit Phuket. With CEB’s trademark lowest fares, this route can contribute to tourist arrivals to both Thailand and the Philippines,” he added.

Phuket is CEB’s 2nd destination in Thailand, aside from Bangkok, where CEB operates 14 times weekly from Manila, Clark and Cebu. Lowest year-round fares to Phuket start at PHP3,499.

Sending off CEB’s first passengers to Phuket were His Excellency Prasas Prasasvinitchai, Ambassador Extraordinary and Plenipotentiary of the Kingdom of Thailand, and Hon. Carmelo Arcilla, executive director of the Civil Aeronautics Board.

“I commend Cebu Pacific for their efforts to promote air linkage within the ASEAN region. Last year, Filipino travel to Thailand had increased by 8.25%. I do believe that Cebu Pacific has played an important part in that figure. This new route will bring even more visitors to Phuket,” said Ambassador Prasasvinitchai during the send-off program.

In the 1st half of 2013, CEB passengers to and from Thailand grew by 13.6%. It launched its direct twice weekly Cebu-Bangkok flights last December 9, 2012.

Hon. Arcilla said in his remarks, “I realize that Cebu Pacific now strikes fear in the heart of competition. They are now in the aviation map of the world, largely in part because of Cebu Pacific being a significant regional carrier.”

In the Philippines, CEB offers the most extensive network of 34 destinations and 62 routes. Aside from Phuket, it offers 21 other international destinations, including Dubai, Osaka, Beijing, Shanghai, Hong Kong and Seoul.

Arcilla added: “I ask Cebu Pacific to keep up the good work, of being a catalyst not only to the aviation industry but also to the economy at large. Because you and I know that air travel is a vital enabler of economic activity. There’s no doubt in my mind that the growth that we’re experiencing in our economy is due in part to the growth of Cebu Pacific in bringing people and goods across and providing convenience to the riding public.”

“I look forward to more destinations to be operated by Cebu Pacific, and rest assured of the support of the government in this endeavor,” he added.

Two better than one

Also looking to cash in on the Manila-Phuket route, budget airliner, Tiger Airways Philippines is offering a P3,499 (about 2,500 baht) round trip ticket for its inaugural flight from Manila to Phuket, Thailand, planned for September 3.

“We are happy to announce that effective September, we are flying to Phuket, Thailand twice a week every Tuesday and Saturday to accommodate as many passengers who wish to visit Phuket,” said Olive Ramos, CEO of TigerAir.

After rebranding as TigerAir Philippines on July 3, the Singapore-founded airline indicated that it planned to open new direct routes that would enable guests to travel faster and more conveniently to major destinations across Asia-Pacific.

On July 18, the airline launched the first and only direct flight between Kalibo and Singapore.