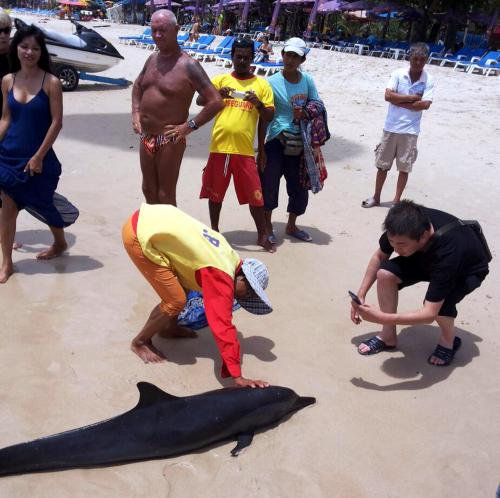 PHUKET: A dolphin that washed ashore at Patong Beach yesterday afternoon died despite the best efforts of bystanders to keep her alive.

The female striped dolphin was first spotted by a tourist, who informed a jet-ski operator, who in turn called the Phuket Marine Biological Center (PMBC).

“I was walking along the beach when a tourist came to tell me about the stranded dolphin, so I reported it,” the jet-ski operator, Noraworn Thonghom, 27, told the Phuket Gazette.

“When I first saw it, it was very weak. We took it back to the water, but it died before the experts arrived,” he said.

By the time PMBC Endangered Species Unit (ESU) officers arrived at the scene, near the police-box at the end of Bangla Road, a crowd of tourists had gathered around the dolphin to take photos.

PMBC veterinarian Dr Patcharaporn Gaewmong told the Gazette,”It was a female striped dolphin, not over 10 years old, and about 30 kilograms in weight. She had a wound on her fin.

“This kind of dolphin is common in the Andaman Sea. We believe she must have been sick. We took her body back to the center to determine the cause of death,” she added.