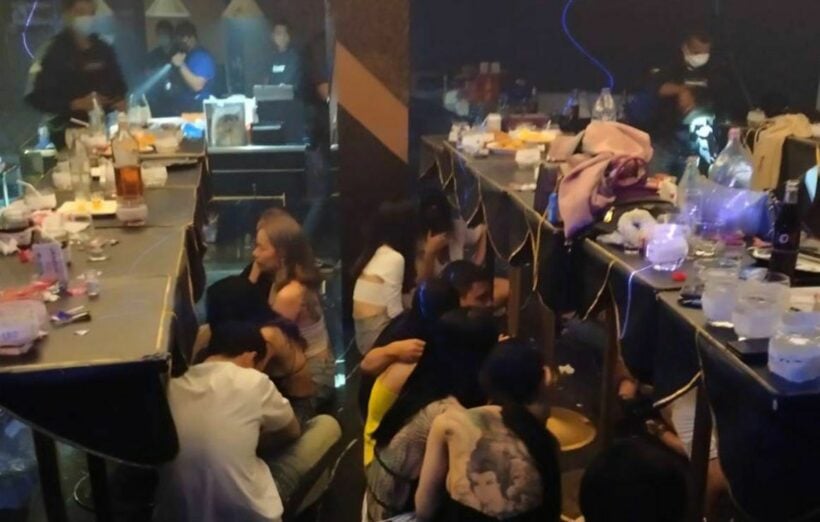 In the early hours of this morning in Bangkok, police arrested 59 young people in possession of illegal drugs and having an illegal party at a hotel in the Ram Intra area. The event was a birthday party, and 29 men and 30 women were in attendance and were arrested last night.

Police from the Khok Khram police station, along with a team from the Special Operations Police, raided the party around 1:30 am after receiving reports that a large group of youths were gathering at the Galaxy Resort Hotel and that there were drugs involved.

Upon arriving, police easily found the hotel room hosting the party as loud music could be heard. They raided the room and caught the 59 people drinking inside. Police searched the location and found 8.5 grammes of ketamine as well as 61 ecstasy pills.

Police confirmed that the room was booked overnight for a birthday party for someone named only as Mr Bird. The illegal party itself was reportedly held in a reception room at the hotel despite the Covid-19 Emergency Decree restrictions that forbid large gatherings, especially with alcohol involved.

A man name Tor was reported to have attended and brought the drug stash that was seized during the raid. The police tested all 59 people at the party for illegal drugs but the test results have not yet been made public.

All attendees were also tested for Covid-19 when taken into custody, The tests were conducted at the Special Operations Police office where the young party participants were transported and all 59 tests came back negative.

The group were then transferred to the Khok Khram police station to face charges. They are all being charged with colluding in illegal possession of illicit drugs as well as violating the Emergency Decree and Communicable Disease Act by holding activities in a crowded location and attending an illegal gathering.

Police announced they also intend to summon the owner of the hotel who approved or allowed the party to face subsequent charges as well.

AlexPTY
Anyone actually charged yet? Sorry I ask the same question many times.

AlexPTY
"The group were then transferred to the Khok Khram police station to face charges." I am sure there is better social distancing for 59 people in police station detention
Manu
13 hours ago, Scribble said: Imagine how many teenagers would be in jail FOR LIFE if Paco was in charge. For all we know this might be the most considerate group busted yet. Maybe they all pre tested themselves before…