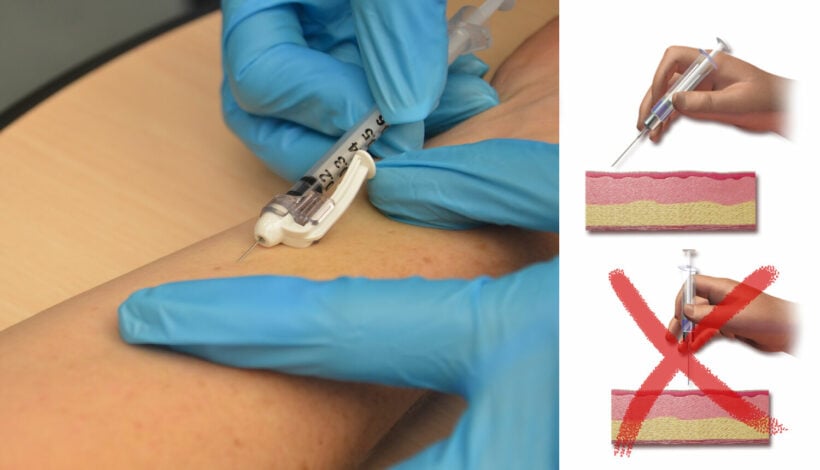 Phuket has become the first province in Thailand to implement a new injection method of administering a third Covid-19 booster vaccine under the skin instead of into the muscle. Staff at the Indoor Sports Stadium at Saphan Hin began using the new vaccination method for the first time yesterday.

The Ministry of Public Health recently approved the new method following a study by staff at Vachira Phuket Hospital that showed an AstraZeneca booster was just as effective as the standard method when injecting only 20% of a normal dose just under the skin.

Until now, all vaccinations in Thailand has been done intramuscularly, but the new method using a subdermal injection – purring the needle only into the skin – saves a significant amount of AstraZeneca doses. The study results were released on September 15 and had tested 242 volunteers who had received 2 Sinovac vaccines previously and were between the ages of 18 and 60.

Results were actually slightly more effective for those who received an under-the-skin injection versus the conventional vaccination method. The test found subdermal injection protected better against Covid-19 and came with fewer side effects like headache or fever.

Also, the new vaccination method requires only 10 to 15 minutes of post-injection observation instead of the 30-minute wait that traditional injection required. The method did however cause more skin irritation and redness.

Doctors are lauding this new injection method that allows them to administer 4 times more vaccines which enables the vaccination process to be sped up. 200,000 residents and people living in Phuket will receive the first round of subdermal vaccines, followed by a second round for foreign residents and migrant workers.

The Phuket Provincial Public Health Office released vaccination figures yesterday that showed 426,387 people have received one vaccine dose while 389,163 people have been fully vaccinated with 2 injections. 66,383 people in Phuket have gotten the booster third vaccine shot so far.

Stonker
21 minutes ago, Convert54 said: What variety of vaccine was administered in Israel overall on which to base that claim? Pfizer. The studies in the UK, by NHE, and independently in Israel, are pretty extensive and pretty conclusive, but it…
Bob20
7 minutes ago, Convert54 said: I do not expect to gain status as a virologist by "reading up". Are you a virologist? Do you believe that the Thai authorities consider it important that international opinion is concerned about  internal administration…
Convert54
1 minute ago, Bob20 said: You appear to have missed the three main points that are seriously to the Thais disadvantage, and just looked at the fringe comments. Keep reading 😉 Not really. I am also not a salesman
Stonker
54 minutes ago, Bob20 said: It's commendable that you read up, but you're not going to be a virologist from reading on the internet. That much, at least, is more than evident from your comments, @Bob20. 57 minutes ago, Bob20 said:…
Stonker
35 minutes ago, Convert54 said: Not really. I am also not a salesman I get the feeling you also read and think before engaging keyboard - not unique here, but more than some do ( 😉 ).