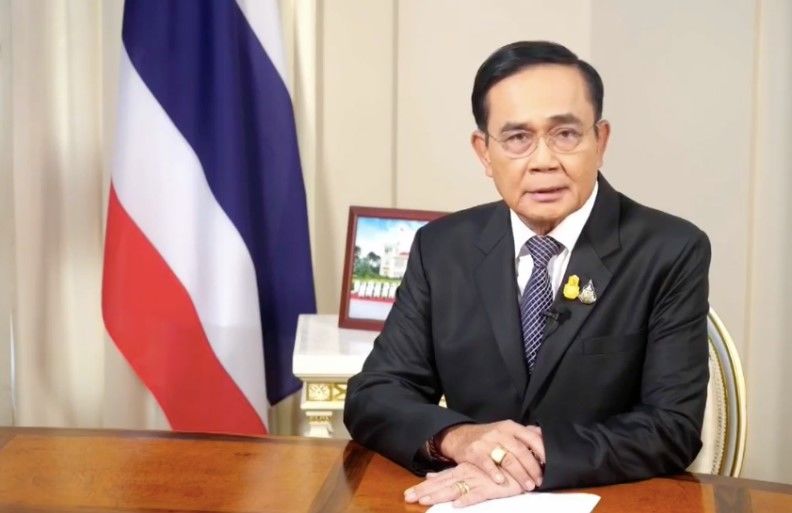 PM Prayut Chan-o-cha addressed the nation in a televised speech last night, saying he’ll lift the State of Emergency order in Bangkok “if there is no violence” and asks that protesters “turn down the volume on hateful or divisive talk.” Later that night, thousands of protesters gathered in front of the Government House, calling on his resignation. They even had a pre-prepared letter for him to sign. But the Prime Minister was long gone by they time they arrived.

The Thai prime minister said the pro-democracy protesters have made their voices heard and he’s requested a special parliament session on October 26 and 27 to discuss topics the protesters have raised. He didn’t go into detail, but the protesters have been calling on government reformation and a rewrite of the 2017 Constitution. They’ve also been consistently pushing Prayut to resign. PM Prayut didn’t respond to that issue during last night’s speech.

Many have condemned the government for using violence against peaceful protesters after high-pressure water cannons were used to break up a demonstration last Friday night at the Pathumwan intersection in Bangkok’s central shopping district. In his recent speech, Prayut acknowledged that things will not get better by using the water cannon, but his version of events at Friday night’s protest is quite different from that which has been reported in most media. The PM claimed that “terrible crimes” were committed against police. He stated that “some people used metal rods to attack officers”.

I am talking to you today at a moment in time that I hope people will look back at and say, this was the time when all Thais made the right decision and sacrificed their personal desires for the greater good of their country.

My duty as a national leader is to look after the needs of everyone in this country, and to try and balance sometimes very different and very extreme views so that we can all live together in this one land that belongs to us all and which we all love.

My duty as a national leader is also to ensure peace, personal security, the prosperity of the nation, the protection from dark forces that may seek to damage our country, and fairness to all in society.

While I can listen to and acknowledge the demands of protestors, I cannot run the country based on protestor or mob demands.

As we have seen, anyone who leads the government faces the mobs of another opposing group. And ultimately, our country becomes ungovernable and chaos descends.

We must break that cycle. And we must do it together.

We must now step back from the edge of the slippery slope that can easily slide to chaos, where all sides lose control of the situation, where emotions take over our better judgement, violence begets more violence, and, as history has shown us all many times, we can end in a situation where the entire country suffers.

Last Friday night, we saw things that should never be in Thailand. We saw terrible crimes being committed against the police using metal rods and huge cutting implements in brutal attacks, with the aim of severely wounding fellow Thais. But when we look deeper, we can also see that, beyond a small group of ruthlessly violent people with bad intentions, that there are also many protestors, who, while they may be breaking the law, were still, peaceful, well-meaning people who are genuine in their desire for a better society and a better nation.

We will not get to such a society by wielding metal bars or the destructive disruption of people’s ability to earn a livelihood, or through offences against institutions that are held in the highest respect.

And, in the same way, we will also not get to a better society through the use of water-cannon.

We will get there through discussion, accommodation, and a willingness to listen to and understand others, and a willingness to compromise. The only way to a lasting solution for all sides that is fair for those on the streets as well as for the many millions who choose not to go on the streets, is to discuss and resolve these differences through the parliamentary process. It is a slow process, but it is one that best avoids injury to our nation. We must show the maturity and patience to take the middle path.

If the protestors seek a solution through tough street action, maybe they will win by side-stepping the parliamentary process. Or maybe they won’t. Both have happened in the past.

If the state seeks to make problems go away through only tough action, maybe it will. Or maybe it won’t. Both have happened in the past, too.

The only sure way to achieve a sustainable, enduring resolution to the problems is to speak to each other, respect the due process of law, and then let the will of the people be resolved in parliament. That is the only way.

The protestors have made their voices and views heard.

It is now time for them to let their views be reconciled with the views of other segments of Thai society through their representatives in parliament. Cabinet has already approved a request to recall parliament for a special session on the 26th and 27th of October, and which is now submitted for royal endorsement.

As the leader of the nation who is responsible for the welfare of all Thais – whether they be protestors or the silent majority with whatever political convictions – I will make the first move to de-escalate this situation.

I am currently preparing to lift the state of severe emergency in Bangkok and will do so promptly if there are no violent incidents.

I ask the protesters to reciprocate with sincerity, to turn down the volume on hateful and divisive talk, and to let us, together, disperse this terrible dark cloud before it moves over our country. Let us respect the law and parliamentary democracy, and let our views be presented through our representatives in parliament.

And while addressing some of these longer-term issues that have been raised, I would like to re-state that there is also work that has to be done to mitigate the terrible suffering caused to people by the global economic crisis created by the Covid virus, and it is work that is also one of our highest priorities at this time.

I am appealing to all sides that we must heal injuries now before they become too deep.