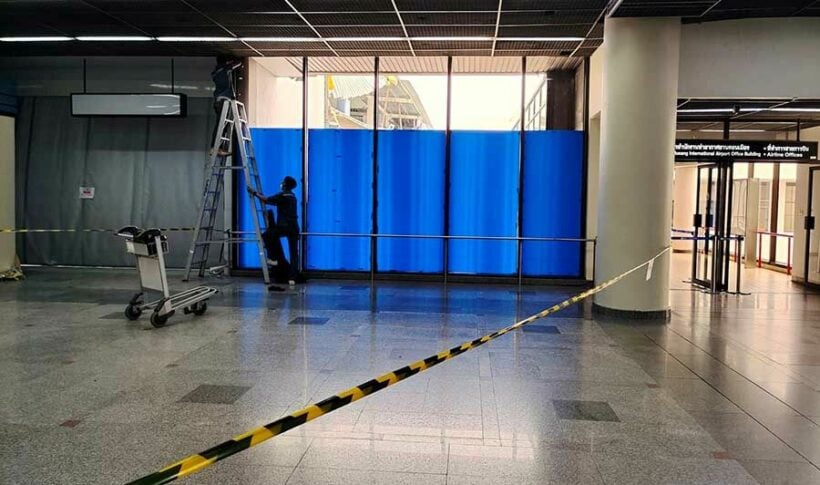 The Ministry of Transport has begun an investigation into the partial collapse of a new passenger building at Bangkok’s Don Mueang airport, the home of most of the international discount airlines and some of the domestic budget carriers.

According to the initial damage assessments, a heavy storm on Sunday evening led to a build-up of rainfall that the building’s guttering was unable to support, leading to a partial collapse of its roof and walls. However, according to a Bangkok Post report, the core structure has not been badly damaged.

The airport building was completed in June 2020, at a cost of over 207 million baht. It was designed to hold large numbers of passengers to alleviate congestion in the international terminal. However, the pandemic meant it remained closed at the time of Monday’s collapse.

Thailand’s Transport Minister, Saksayam Chidchob, says an investigating panel is being created, which will be chaired by the deputy transport permanent secretary, Pisak Jitviriyavasin. The panel will review construction contracts, as well as carrying out damage appraisal following the incident. It is also expected to set guidelines for repair work, which will be carried out by Airports of Thailand.

According to Saksayam, if the repair work takes longer than the duration of the construction contract, AoT will be required to sign another agreement with the contractor to carry out the work. Kerati Kijmanawat, senior executive vice president at AoT, has been appointed chairman of the panel.

Meanwhile, AoT president Nitinai Sirismatthakarn estimates that the inspection could take between 15 and 30 days.

Bluesofa
Was the building vaccinated against Covid? Perhaps the supporting legs were fatigued.

Guest1
On 4/20/2022 at 10:18 AM, Soidog said: However, you don’t expect a rain storm to bring down the roof of a new modern airport building. I would not expect that from an old building. But new buildings? Looking on how…