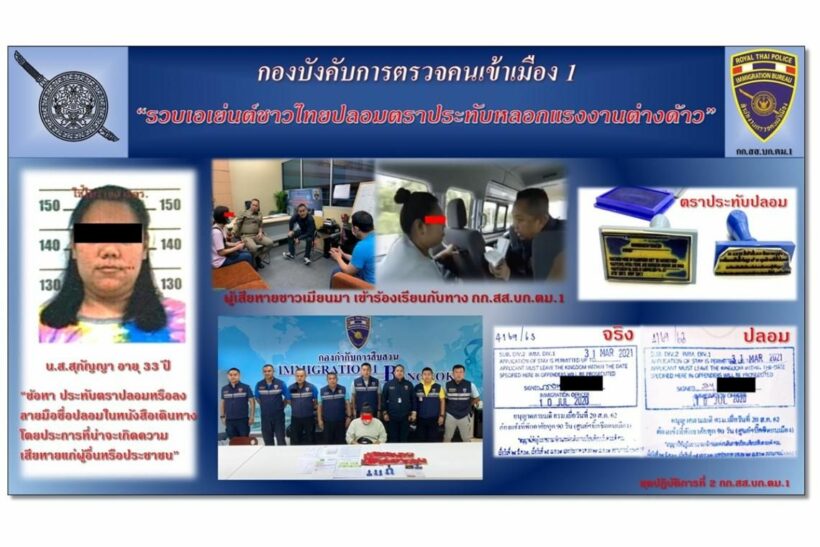 If you’re looking into getting a visa, be careful what agency you choose. A Bangkok visa agent was arrested for allegedly forging visa extensions. Reports say the woman was charging thousands of baht for the fake extensions.

The 33 year old woman Thai media reports as Sukanya has a shop in northern Bangkok advertised as a visa agency. A Burmese woman paid Sukanya 13,000 baht to extend her Non-LA visa. The stamp stated the woman was permitted to stay in Thailand until March 2021. The Burmese woman later realised the stamp was fake and reported it to the Immigration Bureau on July 30.

Police say Sukanya admitted to faking the stamps. Apparently she would sometimes issue real extensions to avoid getting caught. Police say her services started at 5,000 baht. Police did not report the name of the visa agency.

The Immigration Bureau suspects there are others posing as visa agents and they are investigating, Thai media reports.

Earlier this month, an American man and a Thai woman were arrested for allegedly issuing fake visas under the Bangkok company Thai Visa Centre. After the news got out, the company posted on Facebook saying that all of the visas are official and obtained through immigration.

“Immigration has already checked all of our visas, and concluded that they are NOT fake. So please don’t be concerned, all of the statements in the news are ‘alleged.'”