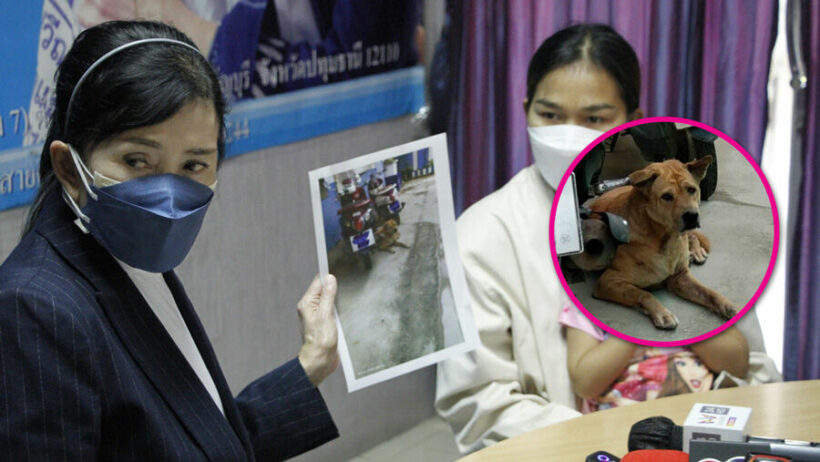 PHOTO: A 2 year old nearly lost her eye to a dog attack. (via Daily Mail)

In Bang Khen, Bangkok, a two year old girl has nearly lost her eye completely after an attack from what appears to be an abandoned dog at a factory camp. a couple reported that a stray dog at a cement factory camp had attacked their two-year-old daughter doing severe damage to her left eye.

The little girl’s mother had been out at work and her father had stepped away to take a shower when he reported that he suddenly heard his baby screaming and came running to find that a dog was attacking her head. He was able to chase the dog away quickly but the baby had already been severely injured.

She was rushed to the hospital where she needed emergency surgery on her left eye, receiving silicone implants to repair the damaged tear ducts. She will likely not be able to open her eye again.

The child was not the first to be said to be bitten by the stray dog wandering around the cement factory work camp. In fact, other parents who worked at the camp said they were afraid to let their children go outside due to this vicious dog.

The dog is reported to have been owned by a former worker at the factory who had left and moved to another camp belonging to the same company, leaving the dog behind. The owner claimed no responsibility for the attack saying that he left the dog there 5 or 6 years ago and it’s not his problem anymore. He sent his son to the camp to offer the girl 500 baht as compensation for the loss of her eye.

The parents of the child appealed for help contacting local officials and police in an attempt to have the dog relocated to somewhere more safe and appropriate, where the children of the workers at the factory could once again be safe to go outside.

Marc26
1 hour ago, JamesE said: Same on the Caribbean islands. All well taken care of but they roamed in packs during the day. It was like their job. "G'night Spot. Gotta get home to the kids and the old ball…

Soidog
12 hours ago, palooka said: They abandon them all the time, my neighbour goes a way for weeks sometimes and  leaves his dogs roaming around with no food. And then they go to the temple and believe in karma. I’m…

palooka
9 hours ago, Marc26 said: I was in Tamarindo Beach, Costa Rica On the beach had all these dogs but they were all well behaved and looked after   I figured they were street dogs the resort took care But…

JamesE
3 minutes ago, palooka said: That works fine till a bitch is on heat then there are fights and howling all day and night. In my experience that wasn't the case. The dogs just went back to their homes at…

palooka
24 minutes ago, JamesE said: In my experience that wasn't the case. The dogs just went back to their homes at night, had their dinner, and done. What you describe, however, was the M.O. of the dogs in Venezuela where…