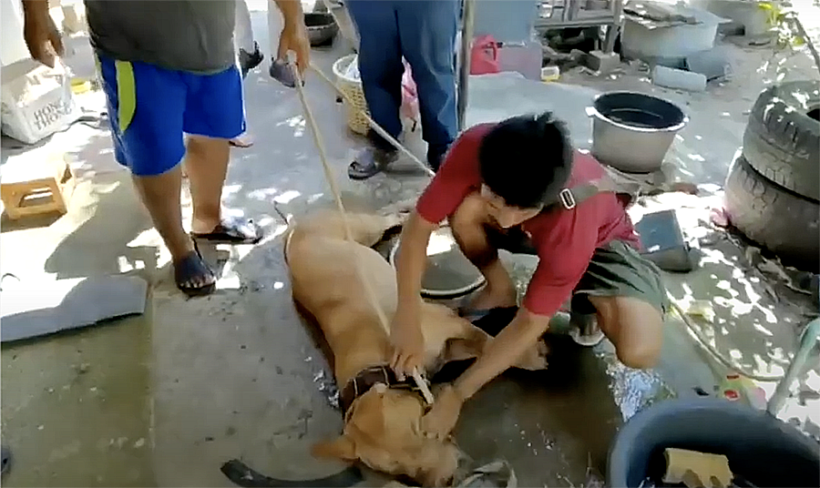 FILE PHOTO: The dog wore a muzzle for safety.

An unexpected guest was seen yesterday at the Bang Lamung, Pattaya funeral of the victim of a pit bull attack. Giant, the guilty dog, was brought to apologise by his new owner. The Thaiger has been following the tragic story of the 55 year old man who was sleeping next to his pet pit bull when his son witnessed the dog wake suddenly and attack its owner, taking a half hour to pull the poor man free.

The victim, Wisit Sanguan, suffered violent bites on his neck and body and died of blood loss and severe wounds the next day in the hospital. His cremation is scheduled at 4pm today in Bang Lamung.

Yesterday Suksa Ketnak, Giant’s new owner, brought the pit bull to Wisit’s funeral to pay respects and apologise. Giant was restrained with a protective muzzle to keep everyone safe. Following with Buddhist tradition, Suksa and Giant came to pray and ‘apologise’ to Wisit’s spirit for the pit bull’s attack and ask for forgiveness.

The Pattaya News reports that the grieving widow accepted the apology with the family saying they forgive Giant and still care for their former pet. Giant expressed love and recognition for the family, excited wagging his tail and letting relatives play and pet him.

After the attack that tragic day, the pit bull was still aggressive hours later and the Chon Buri Pit Bull Club took Giant into custody by sedating him. They announced later that a new owner with experience in troubled dogs had taken the pit bull in. The Pit Bull Club announced that they did not find any evidence of abuse or mistreatment.

Then the story escalated further as the grieving widow lashed out at overzealous internet commenters who posted accusations on social media defending pit bulls and blaming the family assuming they were abusive. She threatened legal action under Thailand’s strict computer crime and defamation laws.

Hopefully, this funeral with a pit bull apology marks a peaceful ending to a tragic saga.

Pattaya, Chon Buri gives timeline of visited places of those infected with Covid