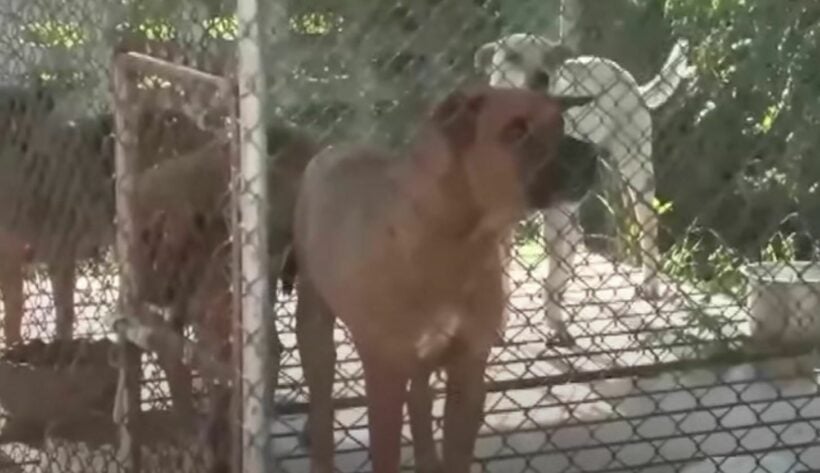 Attempting to drop off a bag of lemons at a neighbour’s house, a 79 year old man instead lost his arm as the neighbour’s dogs viciously attacked him.  The attack took place in the Panat Nikhom district of Chon Buri on Wednesday.

Rescue workers were called to the aid of Juea “Keang” Kitijutirakun after he sustained serious injuries from multiple dog bites. He was transported to the local hospital for urgent medical care. Keang lives alone in his house in Thung Kwang and neighbours say he loves gardening and grows many fruits and vegetables on his property that he likes to give away free to others in the neighbourhood.

On Wednesday though, his neighbours were not home to receive the free lemons and as he dropped the lemons over the fence, one of the neighbour’s 4 dogs bit his arm. The other dogs joined in and severely mangled his arm.

A rescue worker involved with the incident later confirmed to the Pattaya News that Keang’s right arm was so severely injured by the dogs that it had to be amputated. He is now recovering in the hospital but has yet to make a public statement.

The dog owners, to their credit, immediately took full responsibility for the tragic dog attack and vowed to help Keang with his treatment and recovery, though it was unclear if they meant financially as well.

They say they will put a warning sign on their fence to alert others not to attempt to come in because there are fierce dogs in the yard. There has yet to be any information about any possible punishment or legal charges that the dog owners might face as a result of the attack that cost the old man his arm.

The breed of the dogs was also not specified, though the incident was reminiscent of a saga that took place in April, also in Chon Buri, where a pit bull attacked its sleeping owner, who later died of his injuries. The story continued to make headlines as the family of the dog owner fought back against online commenters and then the dog attended the owner’s funeral to ask for forgiveness.

Miblish
The dogs should be destroyed, and the owners imprisoned. If it had been me, when I got out of hospital I'd serve them steaks with razor blades inside. Or if I were feeling more merciful, strychnine.
Morpheus
8 hours ago, 9S_ said: That….actually happened.  Yeah, seen before, backward religion in a backward thinking contry.
Craig
Does anyone really think the dogs owner will support the man financially??  It’s unfortunate the lemon dropper didn’t consider the consequences of the dogs and even more unfortunate nothing will be done about the dogs.  Life will go on as usual here.…

AlexPTY
Hopefully dogs will come and visit this poor man in the hospital to apologize. Or maybe just better to put them all down.
HolyCowCm
15 hours ago, Johno said: This damn dog situation has been out of control for too long , People have to realise if they have a dog they are legally responsible for it attacking people and the dogs should be  put…