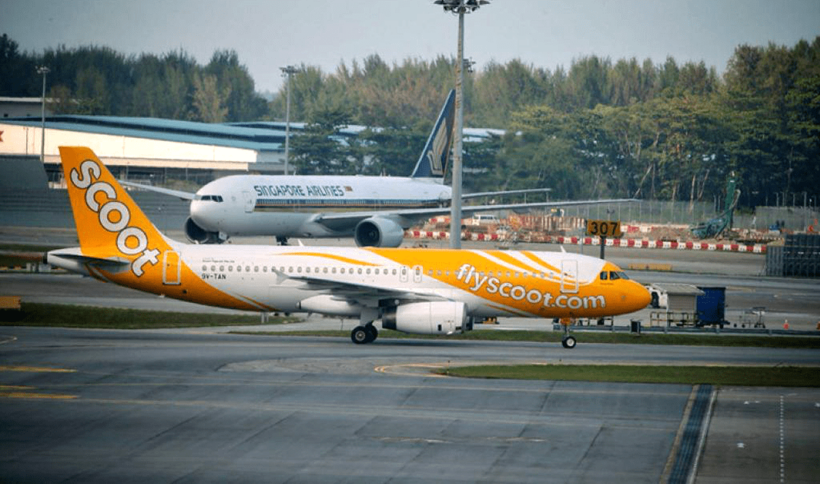 A 41 year old man has been arrested for making a false bomb threat on board a Scoot flight from Singapore to Hat Yai, Songkhla, which resulted in the plane returning to Changi Airport.

Flight TR634, which left Changi Airport at 1.20pm on Thursday (April 5), was escorted back by two Republic of Singapore Air Force (RSAF) F-15SG jets. This is protocol for such incidents according to The Straits Times.

The flight landed without incident at 3.23pm. A Scoot spokesman said the aircraft was carrying 173 passengers and six crew members. The police say preliminary investigations indicated that the suspect claimed he had a bomb in his carry-on baggage to a member of the flight crew. The pilot then decided to turn the plane back to Singapore.

A thorough security search was carried out on board the plane and the baggage of the suspect and his two travelling companions was examined. But no suspicious articles were found.

The Straits Times understands that the suspect is Singaporean. He was arrested under Regulation 8(1) of the United Nations (Anti-Terrorism Measures) Regulations, which states that it is an offence for a person to make false claims that a terrorist act has been, is being or will be carried out. Those found guilty can be punished with a fine not exceeding $500,000 or with imprisonment for a term not exceeding 10 years, or both.

The bogus bomb threat caused delays to passengers both in Singapore and Hat Yai.
Passengers on Flight TR634 bound for Hat Yai were finally able to depart again at about 6.30pm after the aircraft was declared safe after investigations and associated procedures were concluded.

An 18 year old student Daryl Koh was in Hat Yai waiting to board the return Scoot flight back to Singapore. He says passengers were initially told that the delay was due to technical issues.

“We didn’t expect a flight delay, and certainly not a bomb threat.”

In a Facebook post, Defence Minister Ng Eng Hen said that the two RSAF fighter jets took off within minutes after they were scrambled. Dr Ng added that RSAF pilots are on standby round the clock, and that “every threat is considered real until proven otherwise”.

This is the second such threat against a Singapore carrier in recent weeks. Last month, a Singapore Airlines flight from Taipei to Singapore was delayed after a woman called the Taipei police hotline from a payphone, claiming there was a bomb on Flight SQ879. The plane took off 25 minutes late after the threat was confirmed as a hoax.